“Monday is dominoes,” she said. “Tuesday is cards.”

Thursdays are marked for “exercise,” and Fridays bring yoga lessons.

The center’s consistent calendar was thrown for a loop when “Worm Day” was scheduled for a recent Wednesday. The atypical entry was for a lesson led by Creeds Elementary School first-graders.

Cartwright and almost a dozen senior citizens weren’t going to miss it. 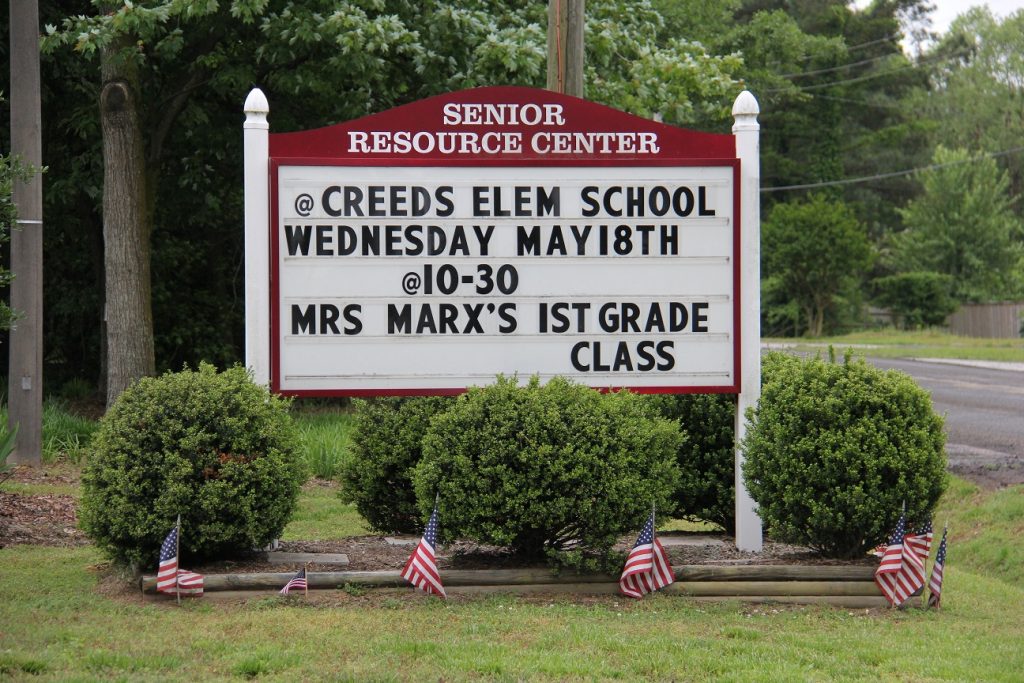 “I went here grades one through 11,” Cartwright told Creeds principal Casey Conger as the group got settled in the classroom. “I was supposed to graduate in ’52, but I got married in ’51.”

The proud former Creeds student was met by equally proud Creeds first-graders who were eager to show off their class pets – thousands and thousands of earthworms.

“We’re going to start by telling you about the vermicomposter, which is where we started,” began first-grade teacher Diane Marx. 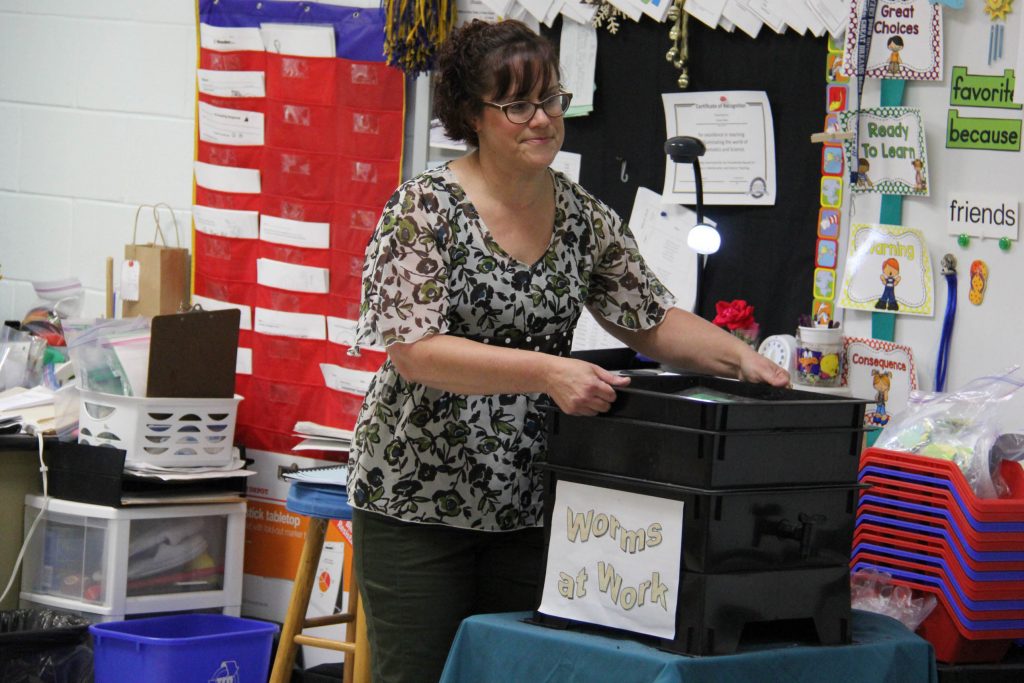 “Back in August, I went out to my composter at home and picked out about 100 worms. We started with 100 in September, and Mrs. Conger is estimating that we have 12,000 worms with the ones here and outside. We had to build the one outside because they were overpopulating in here,” explained Marx.

The seniors would get to see the “worm mansion” outdoors, as Conger called it, but the worms at work in the first-grade classroom were the focus of the lesson for now.

“This is really like a worm hotel,” continued Marx. “It has a lid to keep the moisture inside. And it has multiple levels. It has holes in the bottom so they can move from one level to the next. When you add a new level, food goes in the top level. And then you want the worms to migrate upward so the bottom level [of worm castings] can go outside in the garden.”

“Watch when I pick it up,” said Marx. 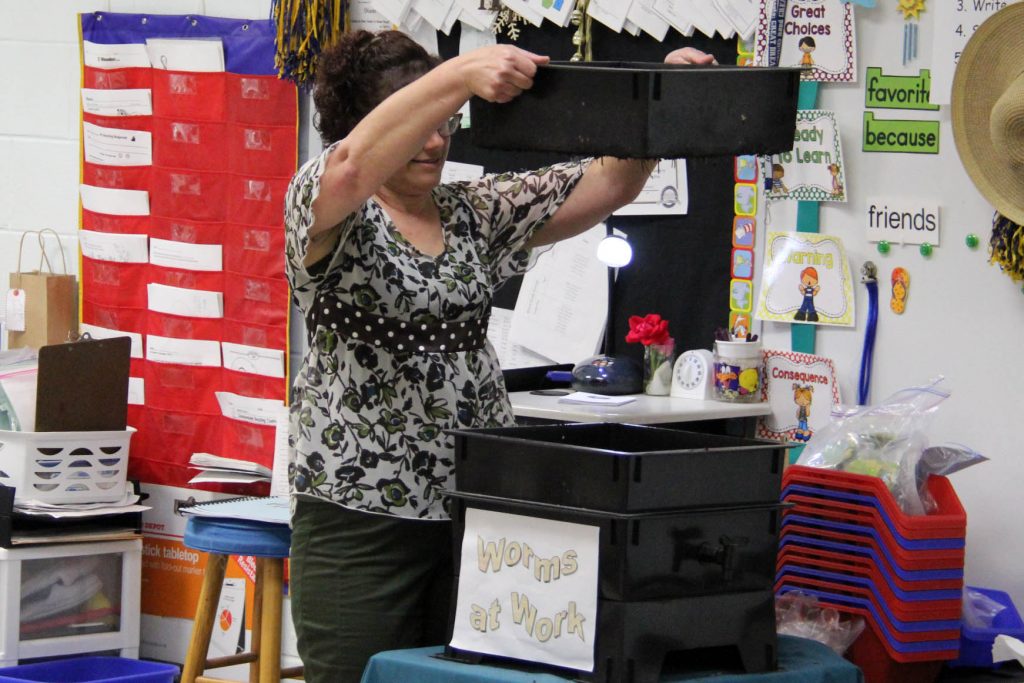 “WORMS!” students screamed with delight at the sight of worms dangling from the holes in the composter.

“When I picked it up an hour ago there were even more worm bottoms sticking out,” said Marx.

Marx invited the seniors to come forward for a closer look.

“The top level right now has a little bit of food in it. It looks like a lot of earth, but it has in it some egg shells, some seeds you can still figure out, a corn cob that they’ve really enjoyed, there’s an avocado skin. The bottom level though looks like just soil. It’s what the worms create.” 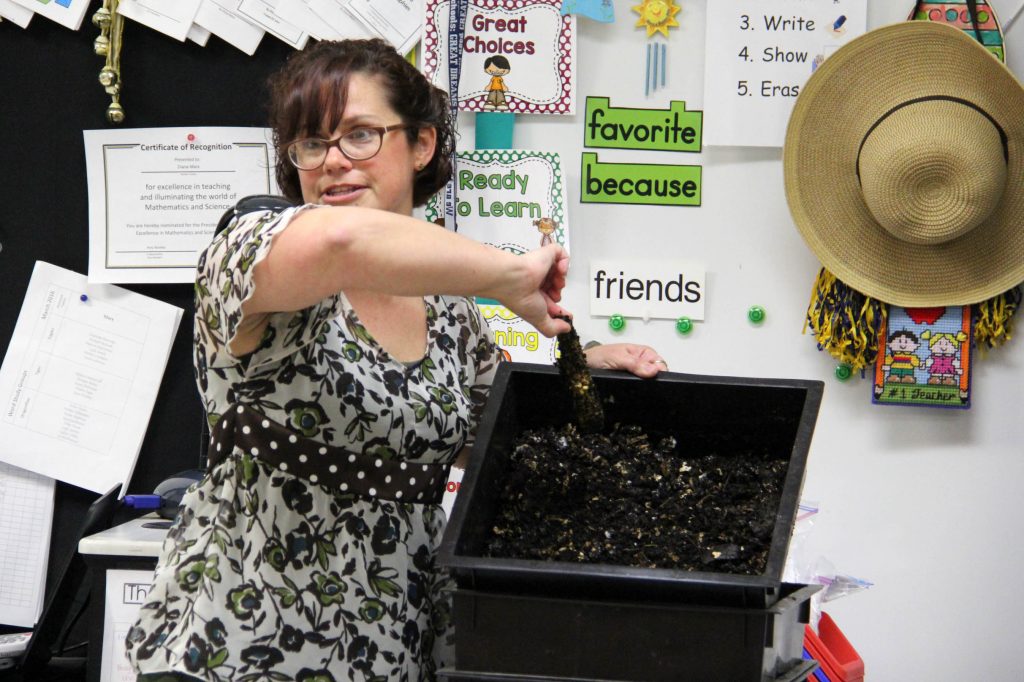 “Oh, I thought you put dirt in there,” said one guest.

With her hands in the worm castings, Marx said, “It feels like playing in the garden.”

Playing with worms was next for first-graders who posed questions and offered explanations using their class pets.

“We are going to put two worms up there,” explained one student, “and then we’re going to flash our light and see if they will go to the darkness or if it will stay on the paper towel.”

Marx used a document camera to make the experiment visible on the classroom whiteboard. 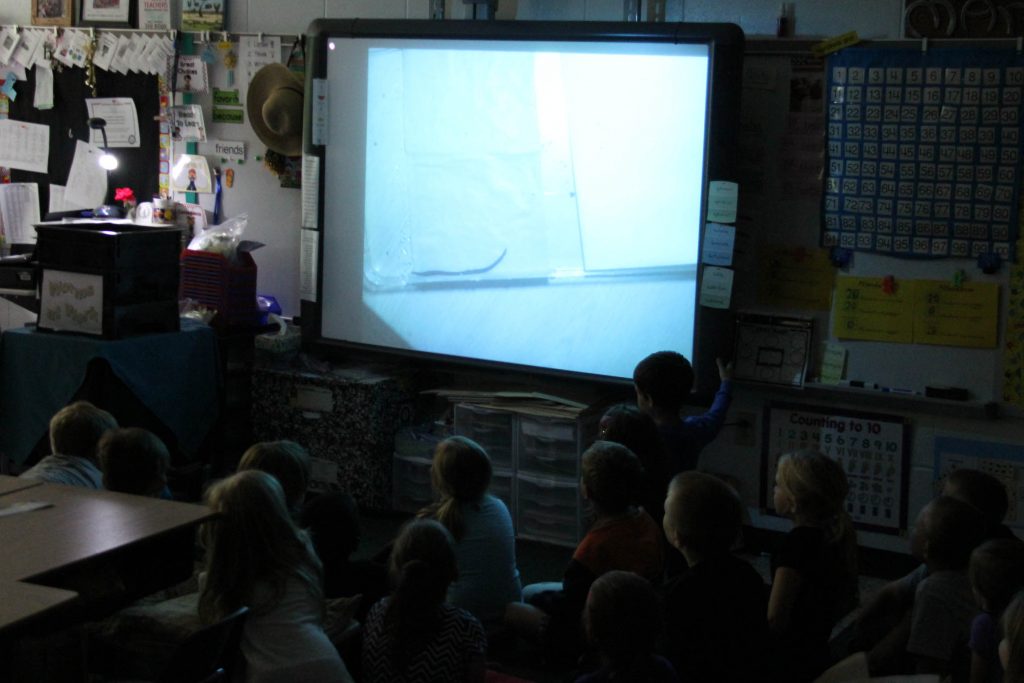 “You can see their front end is already trying to figure out how to get out of the light,” noted Marx.

The seniors laugh as they watch the worms wiggle and search for darkness.

“So what conclusion did we come to?” Conger asked the first-graders.

The remaining eight questions ranged from how fast worms move and their preferred habitats to what they eat. 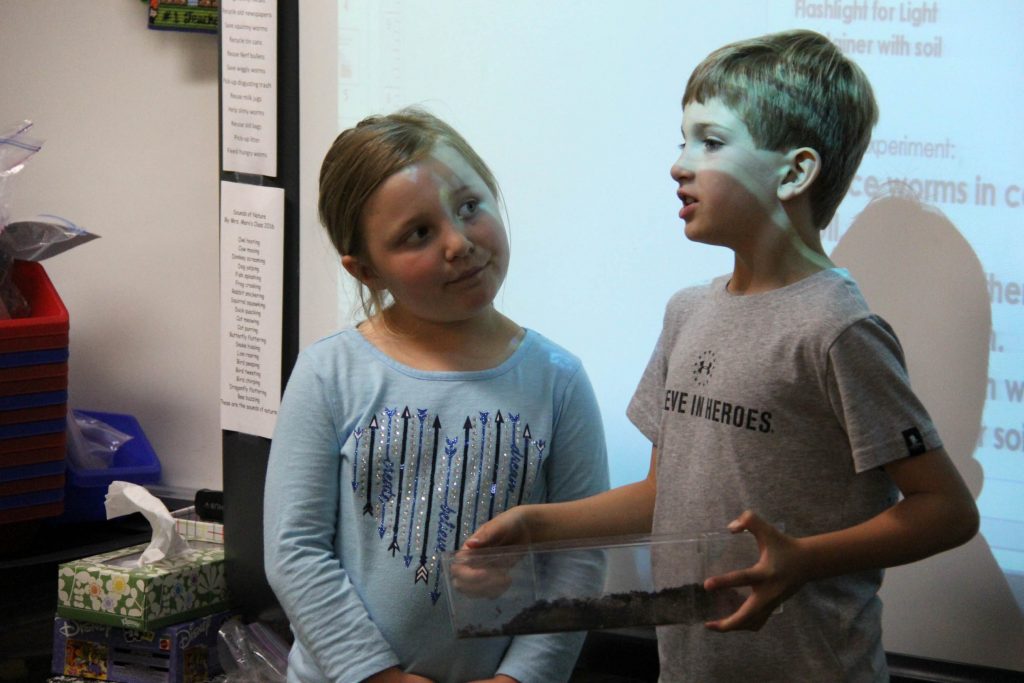 “Here, little wormy,” called a student attempting to direct a worm to one habitat.

“We’ve learned not all worms are created equal,” Marx told the guests. “Not all of them are as bright. The last time we did this experiment, one went into the rock.”

One student pointed to the screen, “That one’s not very bright.”

“Must be a senior citizen,” quipped one senior making all the adults in the room laugh.

Students used a bag of food scraps to show what worms eat and how they prep a new level of the vermicomposter. 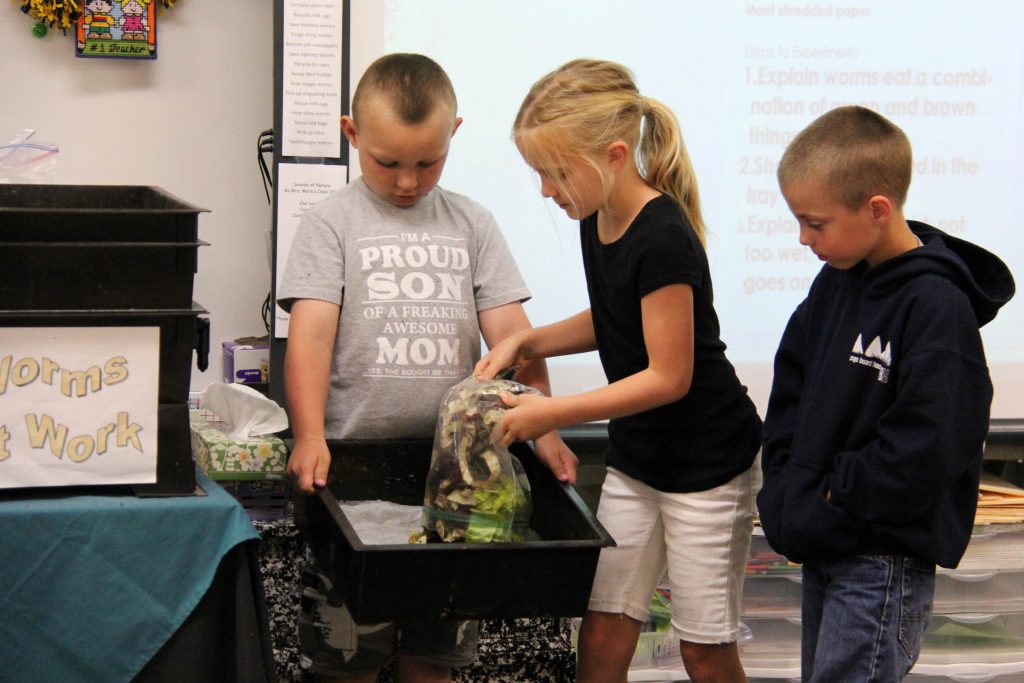 “Coffee grounds are like chocolate to worms,” added Conger. “We have several people saving their coffee grounds.”

Marx asked student presenters what should be kept out of the composter?

“Cheese and meat,” answered a student.

“Not that they won’t eat it,” Marx told guests, “but it will smell.”

Marx topped off the “dish” with layers of moist shredded paper. 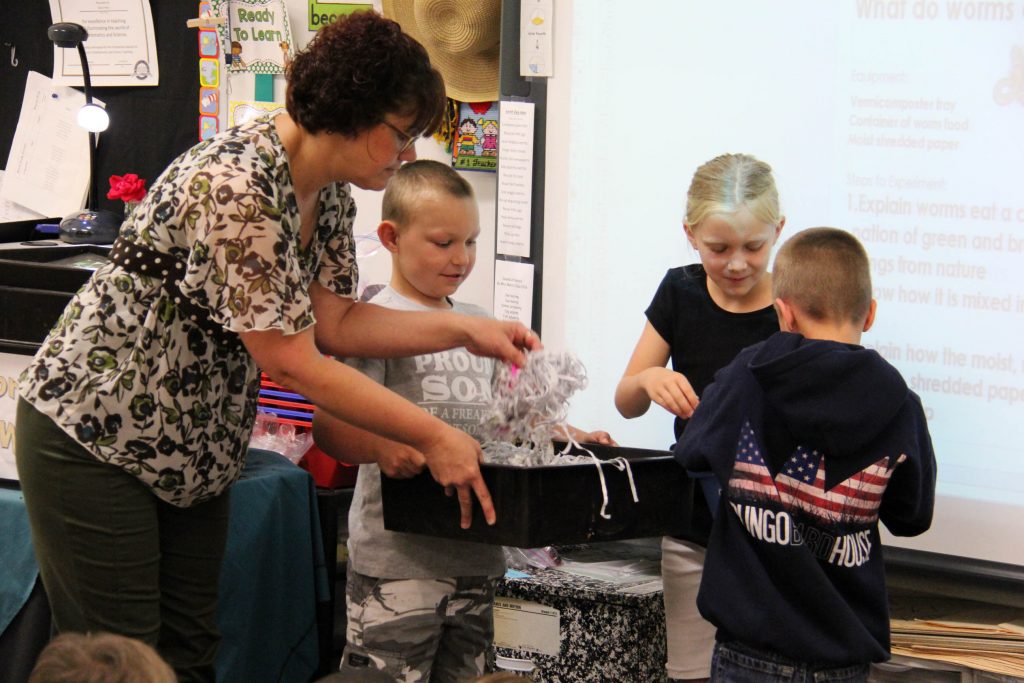 “That looks yummy for worms!” a first-grader exclaimed.

Last but not least, first-graders shared the secret of “worm tea.”

“It’s a super fertilizer,” said another.

“If you use it on plants, it makes them grow bigger than it’s supposed to be,” said a third student. 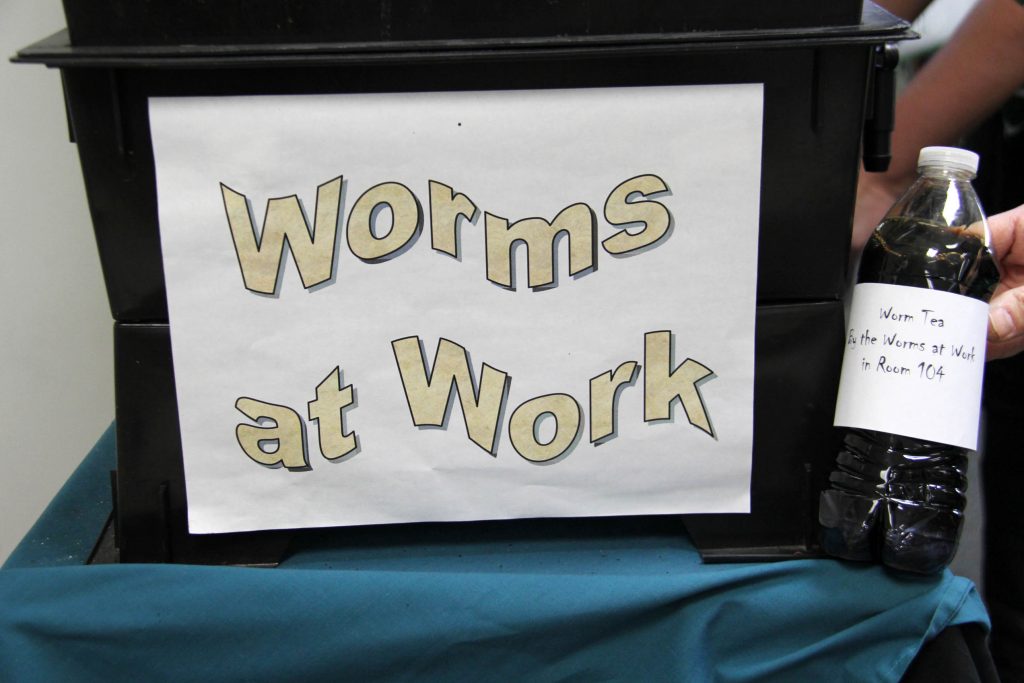 Using it on plants is exactly what Creeds fourth-graders are doing as part of their studies on measurement, a citywide grade-level objective.

Conger explained to their guests that fourth-graders designed and measured quadrants for four plant beds located not too far from the outdoor worm mansion. Each quadrant has the same plants but the fertilizer is different so the students can study how that factor impacts plant growth.

Worm tea and worm castings from the first-graders’ worm farm fertilize two of the beds. Store-bought fertilizer, Miracle Gro, is used with the third set of plants. The fourth bed has compost made on-site from students’ lunch scraps. 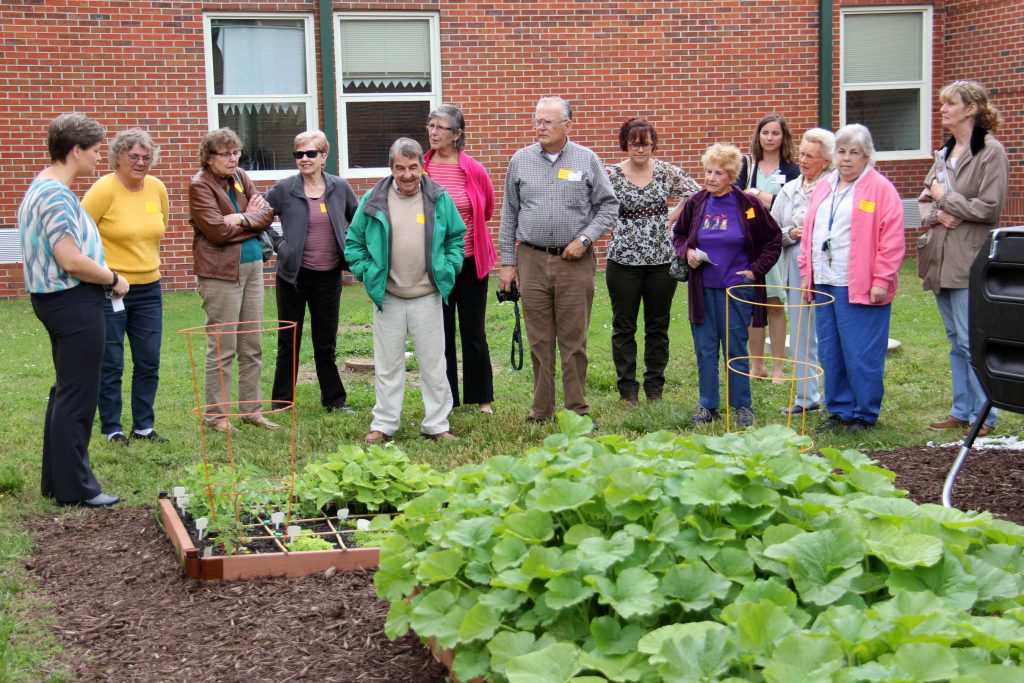 “The green beans are loving the worm team,” shared Conger.

Marx added, “Fifth-grade sent down a messenger this morning to ask for another bottle of worm tea for their plants upstairs. So they are experimenting with it as well.” 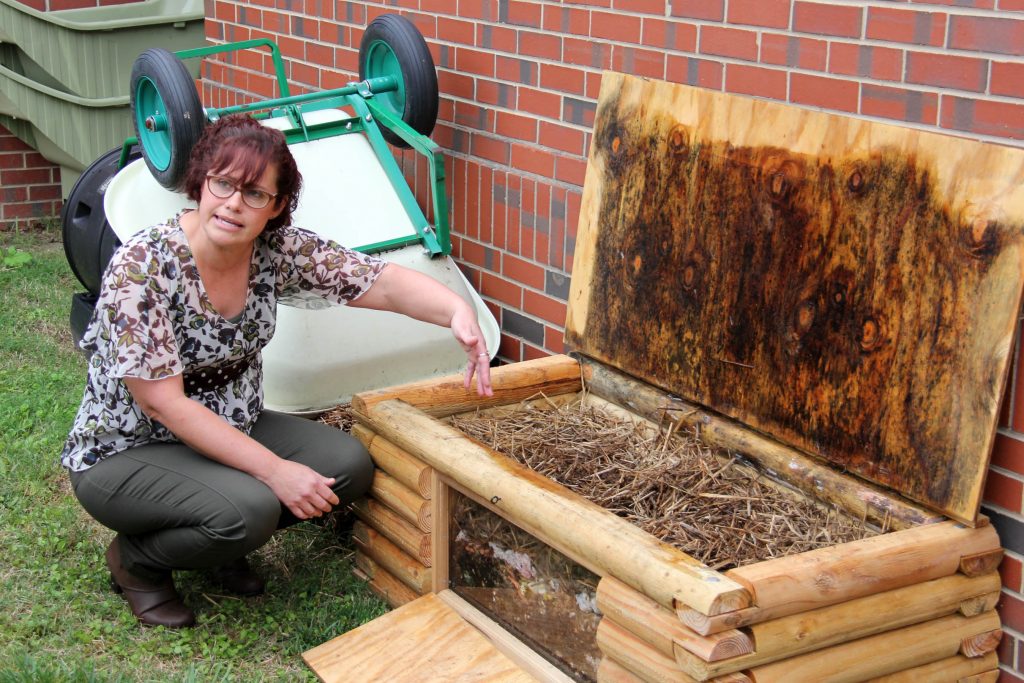 “Did you know worms could be so exciting?” Conger asked their special guests.

“You can save the coffee grounds at the senior center. That would be a nice partnership,” she added.

As Conger escorted the senior visitors to the front of the school, Juanita Swoope marveled at what she had seen over the last hour.

“We didn’t do anything like that when I was in school. It was very interesting to see what the kids are doing today,” she said.

Cartwright was in awe, too.

“I had never heard of children doing that before,” she said. “I used to be a school bus driver, too — drove for Creeds.”

The first-graders may have found themselves a new worm farmer. That is, after dominoes on Mondays and cards on Tuesdays.