The focus of the afterschool lesson for a small group of fifth-graders from Seatack Elementary An Achieveable Dream Academy was the ABCs.

Robert Pizzini wanted to make sure the students understood their importance. 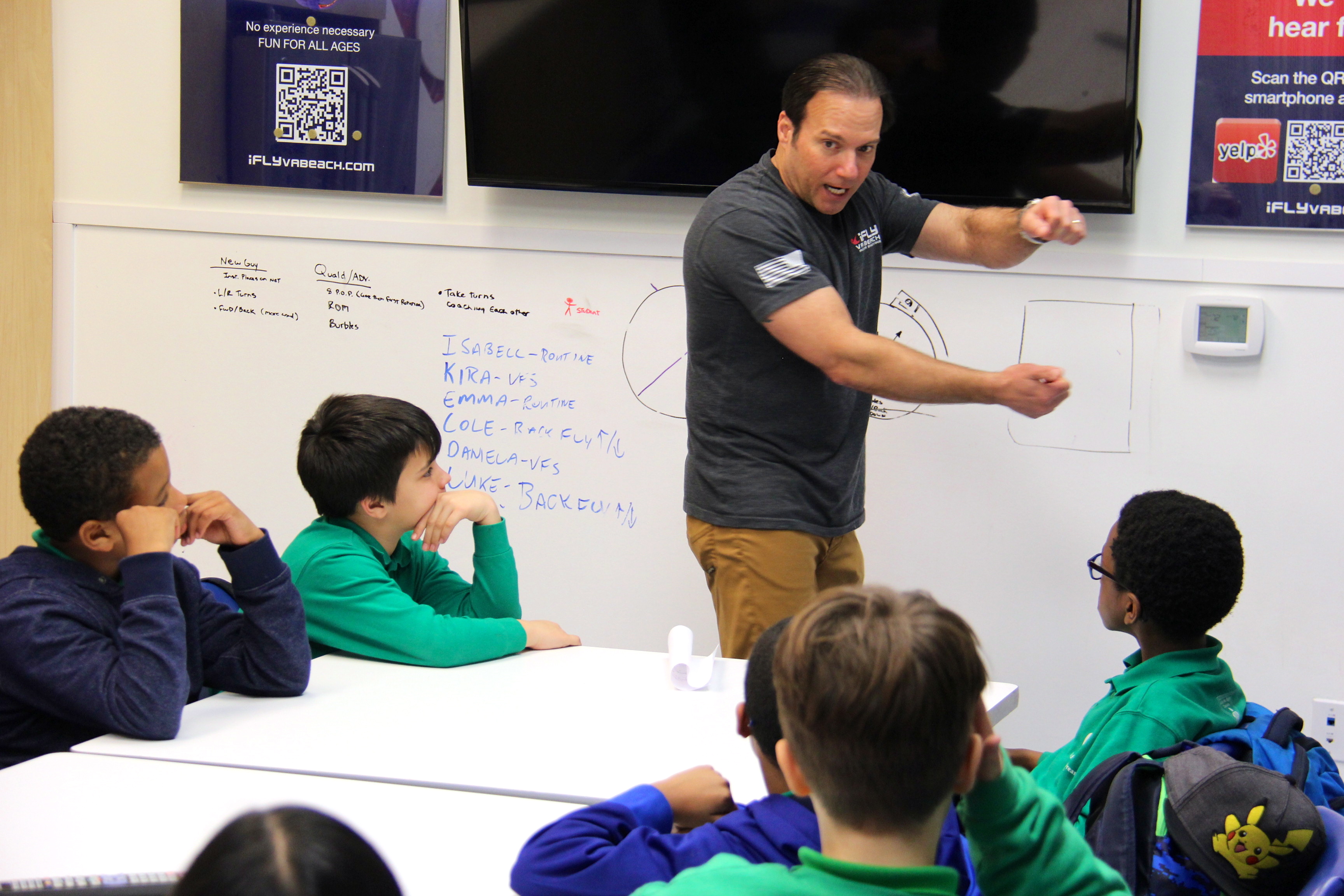 “At the age of 10, 11 and 12, this is really where you develop the skills that you’re going to have for the rest of your life,” he told them. “If you practice, agility, balance and coordination – A, B, C – now, it’s going to be with you the rest of your life. That’s how athletes develop. The more you practice these different skills, the better you become at any sport you participate in, including the sport of indoor skydiving.”

“We’re going to apply them in a wind tunnel,” continued Pizzini. “You’re on week five and you’re starting to get really good. We’ll see what Coach Zack says when he gets you ready for today.”

The 12 students, six boys and six girls, are in their fifth week of a 13-week indoor skydiving program at iFLY VA Beach. Pizzini, chief executive officer, contacted VBCPS Superintendent Aaron Spence in the fall to discuss the program and the company’s desire to donate lessons to students.

And after only five lessons, Pizzini’s right – the students are starting to get really good.

Seatack fifth-graders who were interested in the opportunity were invited to write persuasive essays that were reviewed by a panel of judges, including Pizzini and other iFLY coaches.

“That was one of the most touching things,” said Zack Jones, lead flight instructor at iFLY VA Beach. “A lot of kids were very unsure. They thought they weren’t going to be good enough.”

The fifth-graders have already proven themselves wrong.

“My first time, I was scared and nervous because it was my first time flying,” said Dany, “but now it’s like, I can do anything!”

“I’ve learned how to go up, down and sideways,” said Penelope. “It is very fun and entertaining because I really like flying.”

“At first, I didn’t want to go in,” said Love. “I was so scared. I didn’t see the net. I just thought we were going to drop and go BOOM! But it is fun to go up and go down and do the high fly. I was pretty scared for the high fly. It was like being on top of a building where you could look down.”

Coach Zack surprised Love with another “high fly” in the most recent session, taking her by one arm and leg to circle higher together in the wind tunnel. 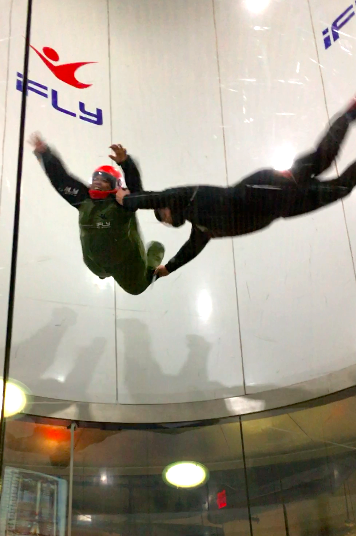 Whether they are flying high or hovering at eye level, students are clearly having the time of their lives.

“Flying has been a dream of mine,” said Amare. “Some people might think it’s funny, but I just think it’s a great dream.”

Flying like an eagle has been the dream for Austin as well. “My dream came true once I learned to how to fly. Now that I know the basics, we can start having fun.”

The “basics” include the subtle body movements that allow flyers to go up, down, sideways, turn or stay neutral. With Pizzini, the students recalled the various instructions they have learned thus far.

Pizzini also coached them on how to make a 360-degree turn, comparing the move to the steering wheel of a car.

This is not to mention the multiple hand gestures coaches use to communicate with students in the wind tunnel, which they review in a classroom before each flying session. 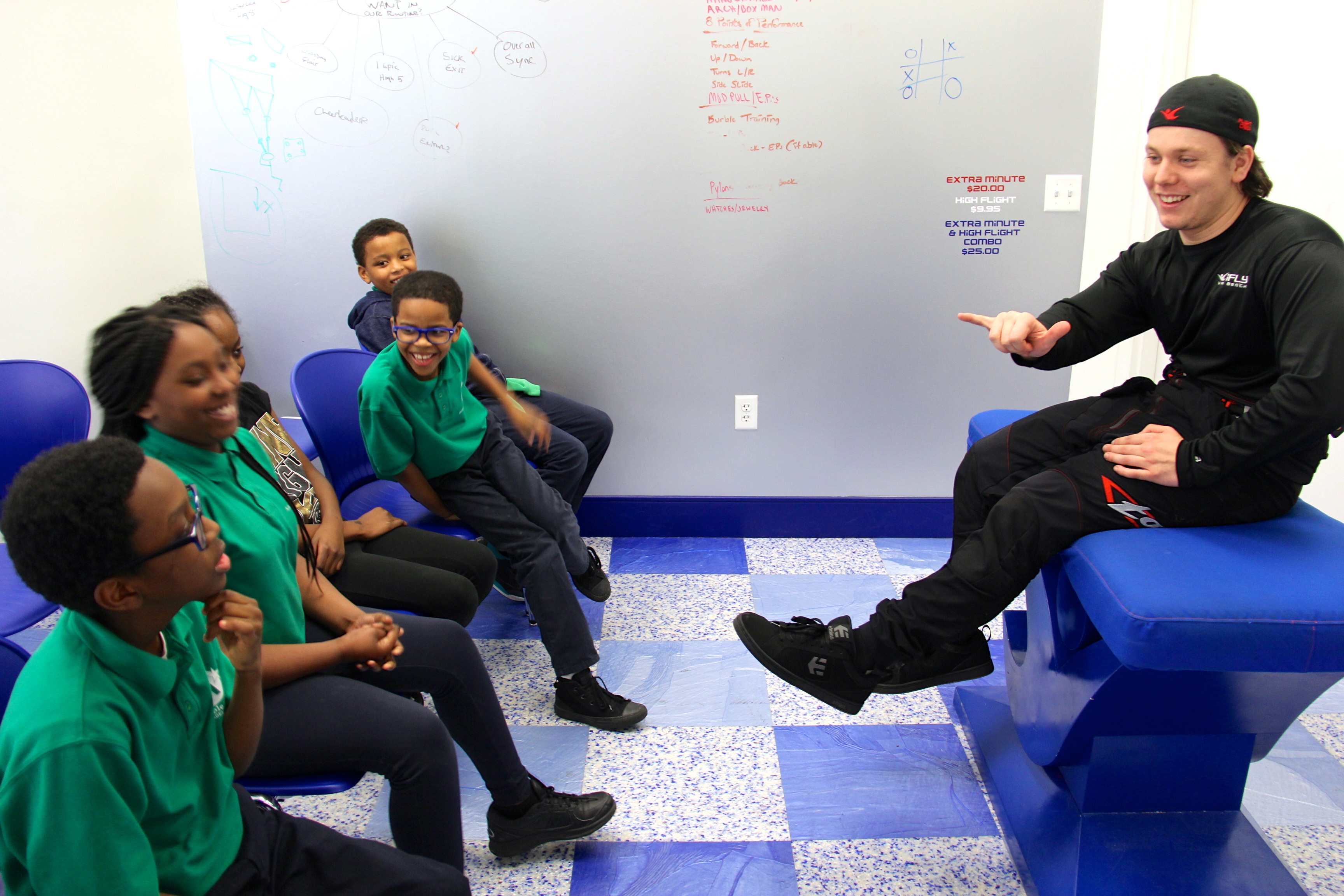 What seems overwhelming to an observer is already becoming second nature to the students.

That’s Pizzini’s goal for them. “We want you to get to the point where you don’t have to think about it,” he said, comparing it to walking. “You don’t have to think, ‘I put my left foot out and then I put my right foot out.’ You just get up and walk, and that’s what we want to do when you fly.”

He has more goals for his young flyers.

“The immediate goal is that they faced a challenge and overcame it, and that, consciously or subconsciously, they have that much more confidence in their life going forward. We also want them to be proud and to develop pride – confidence and pride.”

Pizzini hopes his staff will continue working with some of the current Seatack students as they advance to middle school and high school, and he plans to donate lessons to at least two school groups next year. “So, ideally they’re standing on a high school graduation stage and they’re thinking about how awesome this was,” he said looking forward.

There’s no question the students are already thinking how awesome this experience is.

“You get to fly like a superhero,” said Sammy. “You can be like your own superhero. I would be called Super Sammy.” 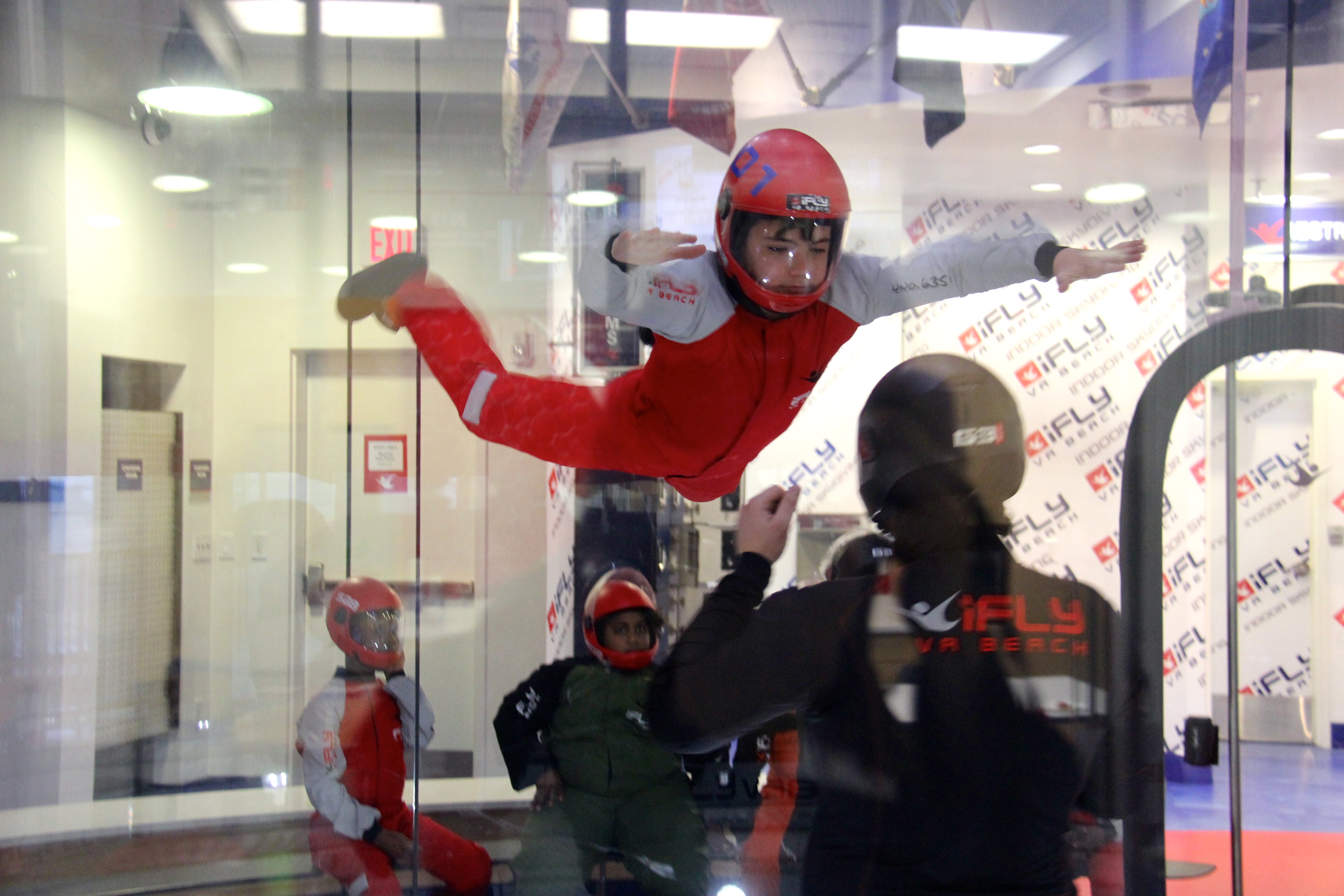 Flying is not the only lesson for students. Each weekly visit begins with an hour-long session in which the iFLY staff or guest speakers cover topics ranging from physics and parachutes to nutrition and teamwork. It’s also a time to enjoy dinner together, courtesy of iFLY.

“Can anyone tell me what you think a team is?” Pizzini asked students.

“Team means to me, basically, that people care about each other and are willing to help people along the way to get where each other needs to go,” said Penelope. “And they won’t leave anyone else behind.”

“I love that you said teammates don’t leave each other behind. That’s perfect,” encouraged Pizzini. 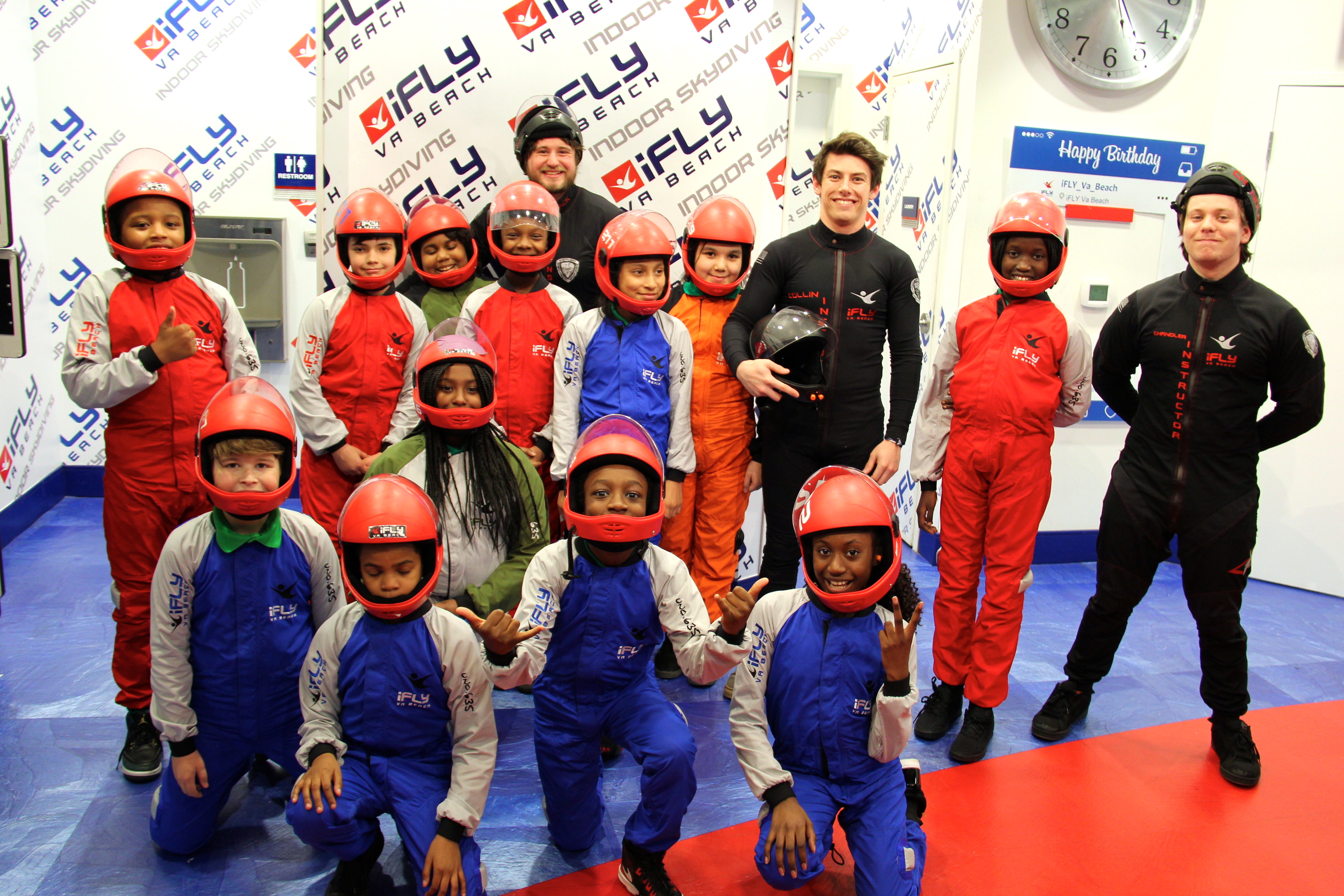 “When I think of a team, I think of people that are working together,” shared Sammy. “A team faces challenges together. So, if one person faces a challenge, you face that challenge with them and go through it together.”

Pizzini agreed. “Teammates are there for each other, regardless. We help each other out.”

No wonder Coach Zack enjoys Thursdays as much as the students do.

“I write the schedule most weeks and I make sure to put myself on this,” he said. It’s something I look forward to every week. All the kids are so respectful and nice, and every week you can tell the kids want to be here. I love it.” 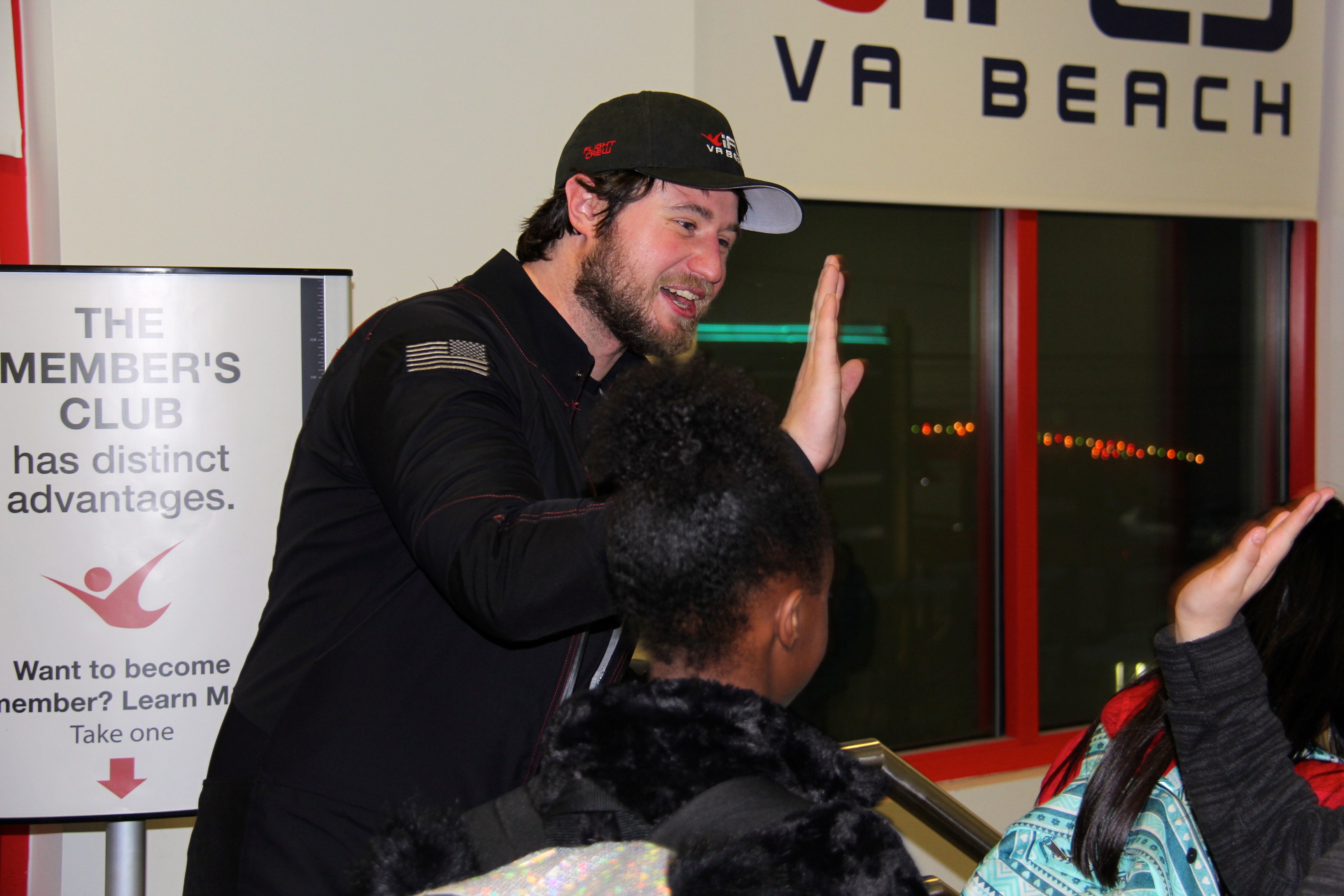 He added, “It’s a really cool opportunity for us to give back. It’s great to work one-on-one with them and give them that little bit of encouragement. I want them to feel like they truly succeeded in something. I want them to have that confidence and to come out of this and say, ‘You know what? I’m really good at this.’”

When asked what he has learned so far, Amare responded, “I’m a natural.”

See more Seatack flyers in the videos below.