Max and Mia have a problem.

Actually, they have three problems, and they all involve baking, buying and selling cupcakes.

Second-graders at Christopher Farms Elementary (CFES) are clamoring for Max and Mia’s cupcakes — but not because they are a favorite dessert. 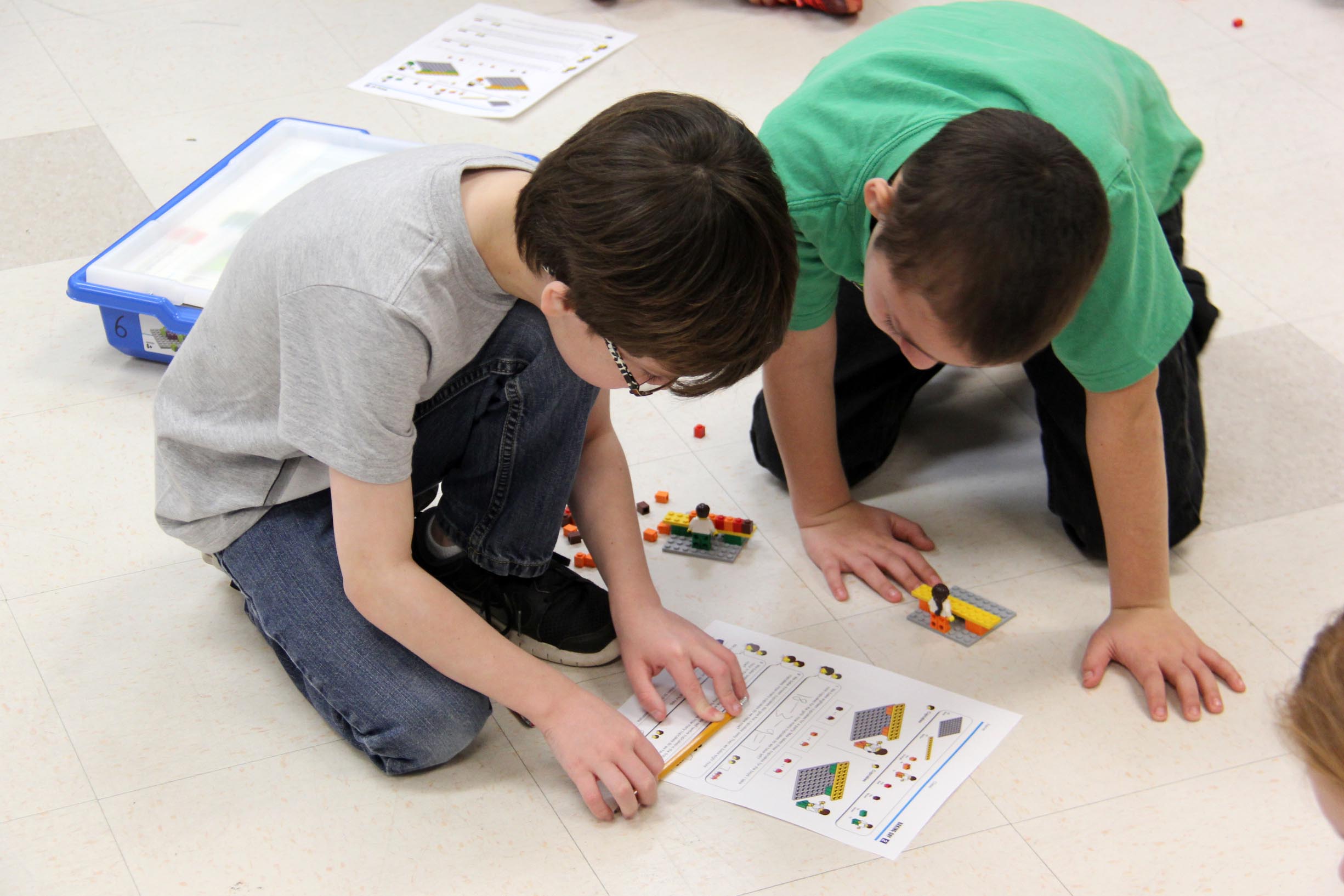 Rather, the tasty treats are LEGO® bricks serving as the basis for math problems students are solving together. Last month, the interlocking blocks represented individual flowers that second-graders turned into bouquets through the magic of addition.

“It definitely engages them,” said Mary Clifford, math specialist at CFES. “They get really excited about it just because it’s a different way of learning math. It kind of tricks them into learning math because they don’t realize what they are doing.” 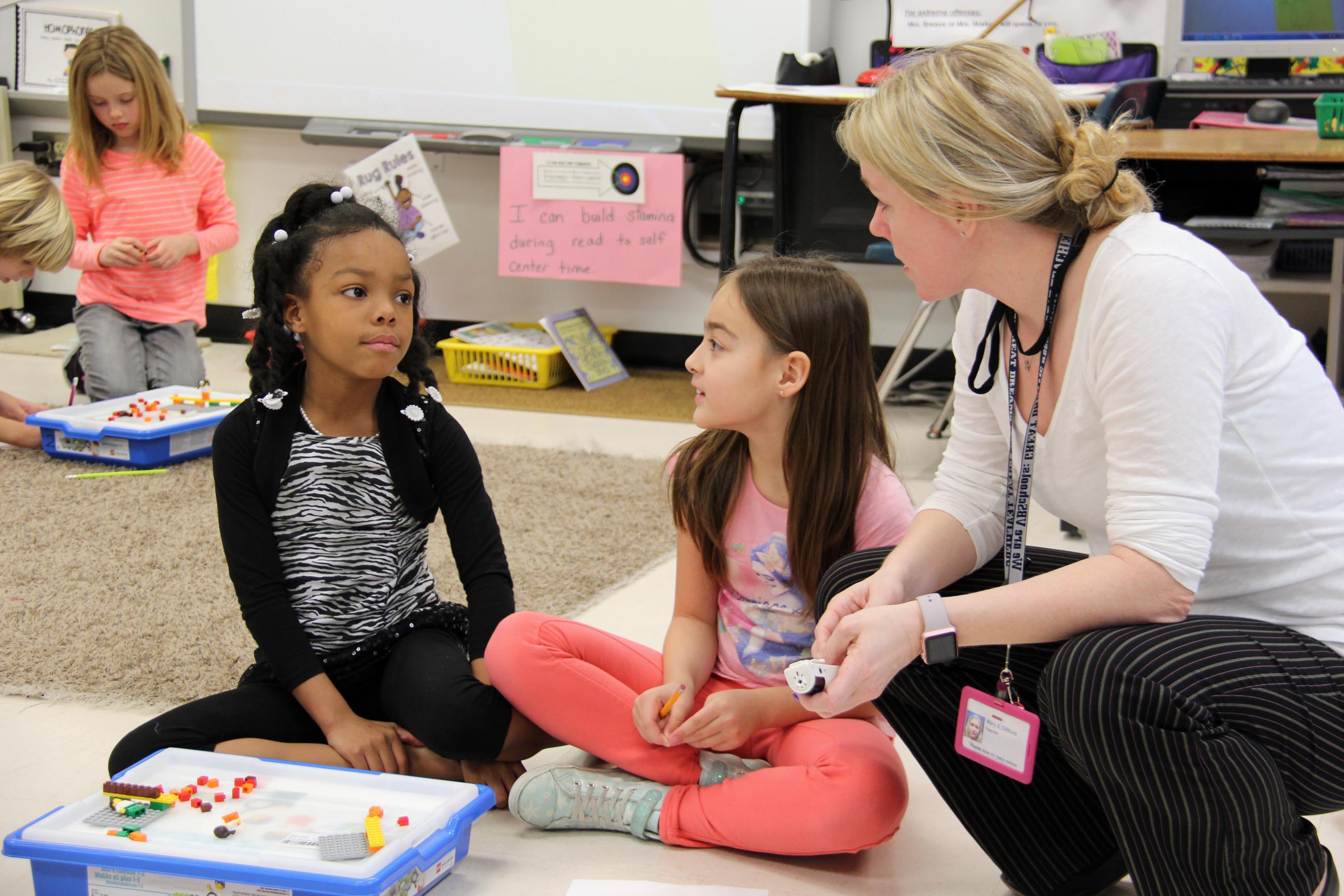 Also engaged with LEGO products are second-graders and third-graders in Newtown Elementary School’s afterschool robotics club. They are using LEGO WeDo robotic kits to construct various figures and using related software to program them to move.

Marion built and programmed a roaring lion to stand tall with pride on its front legs. 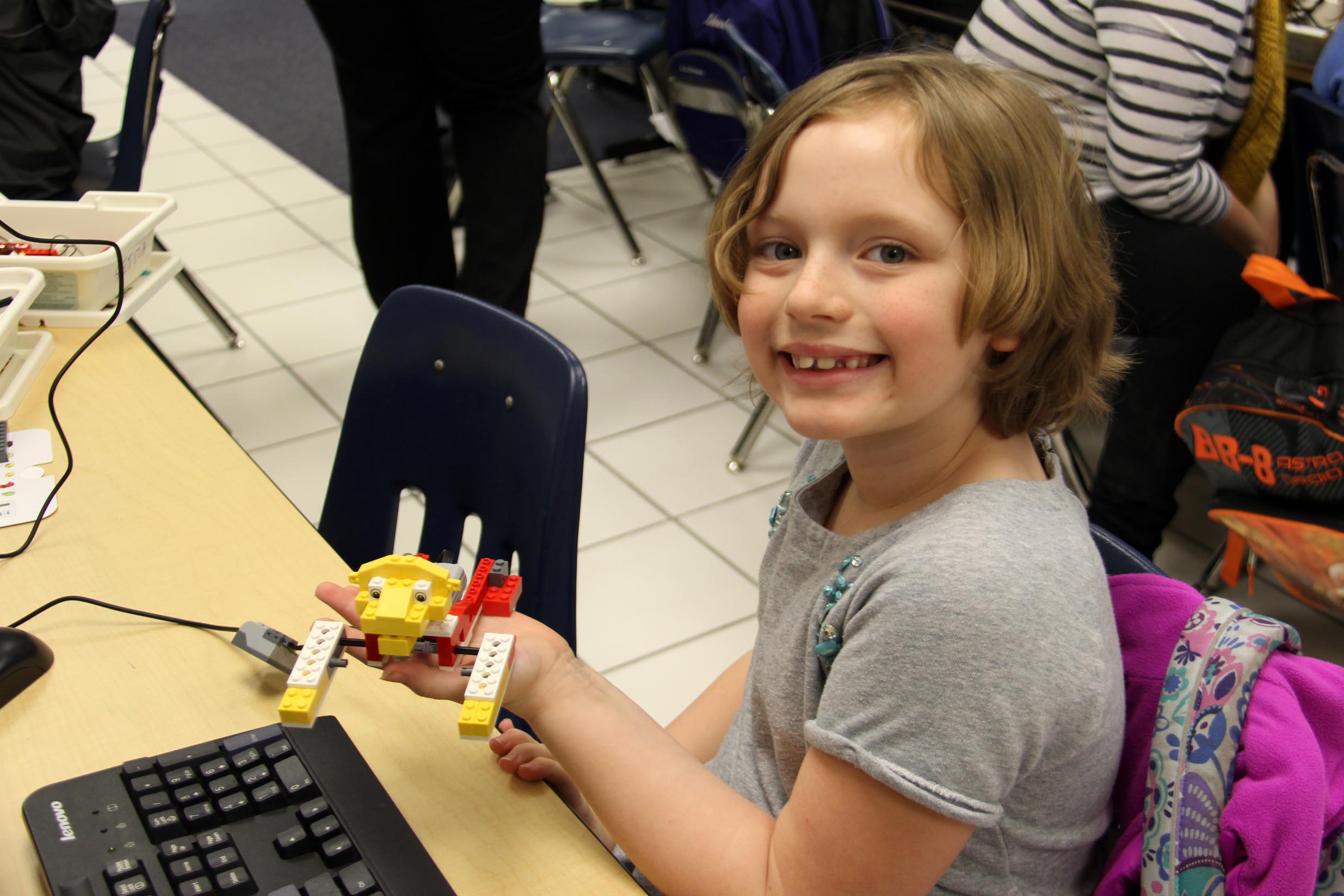 Jordan’s goal kicker spun one leg faster as he changed the coding to adjust the speed. 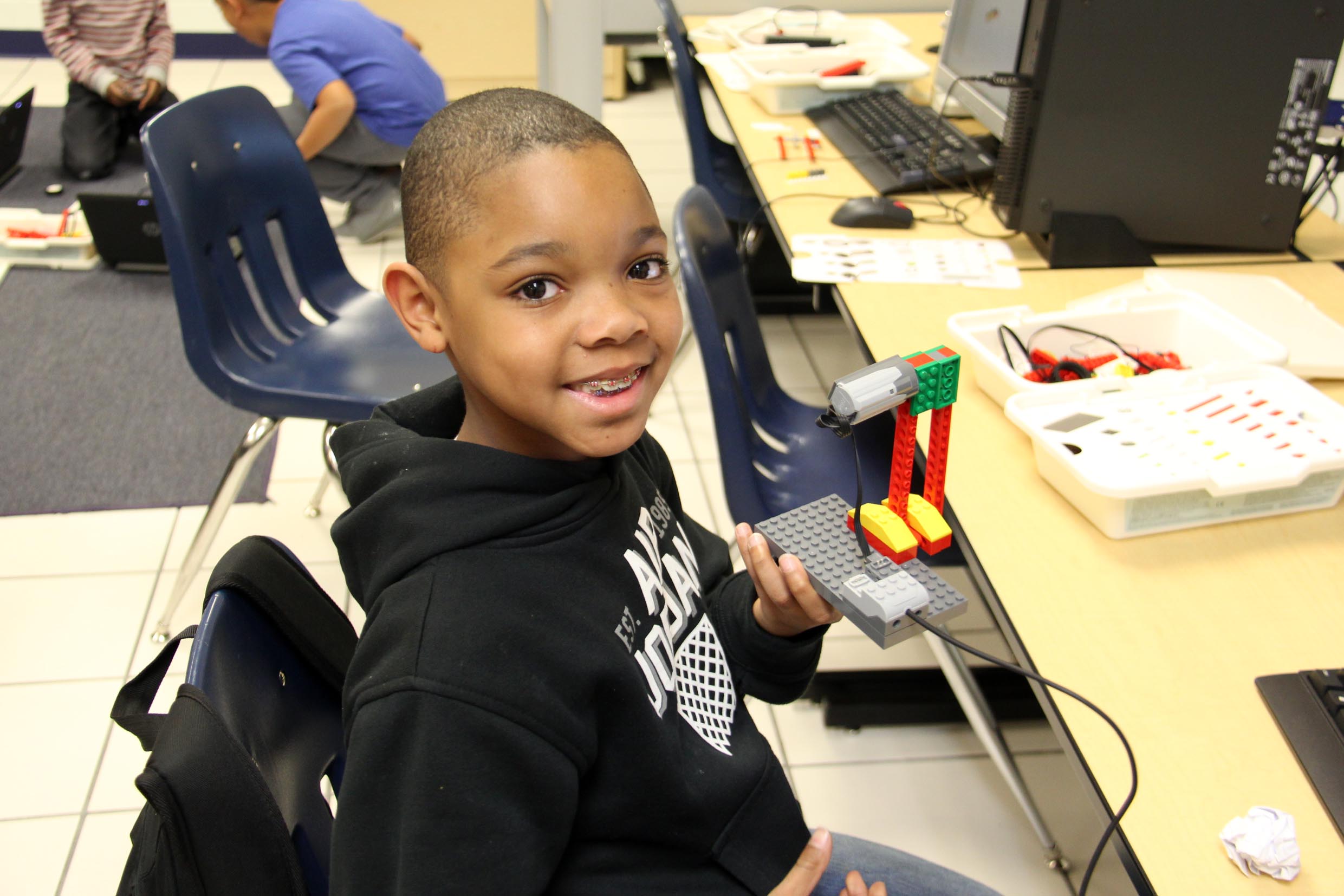 Amaya’s sailboat rocked back and forth in rough seas. And Rude’s flying bird, which he named Scruffy, flapped its wings and chirped with sounds he programmed. He also coded Scruffy to “ribbit” like a frog – just because. 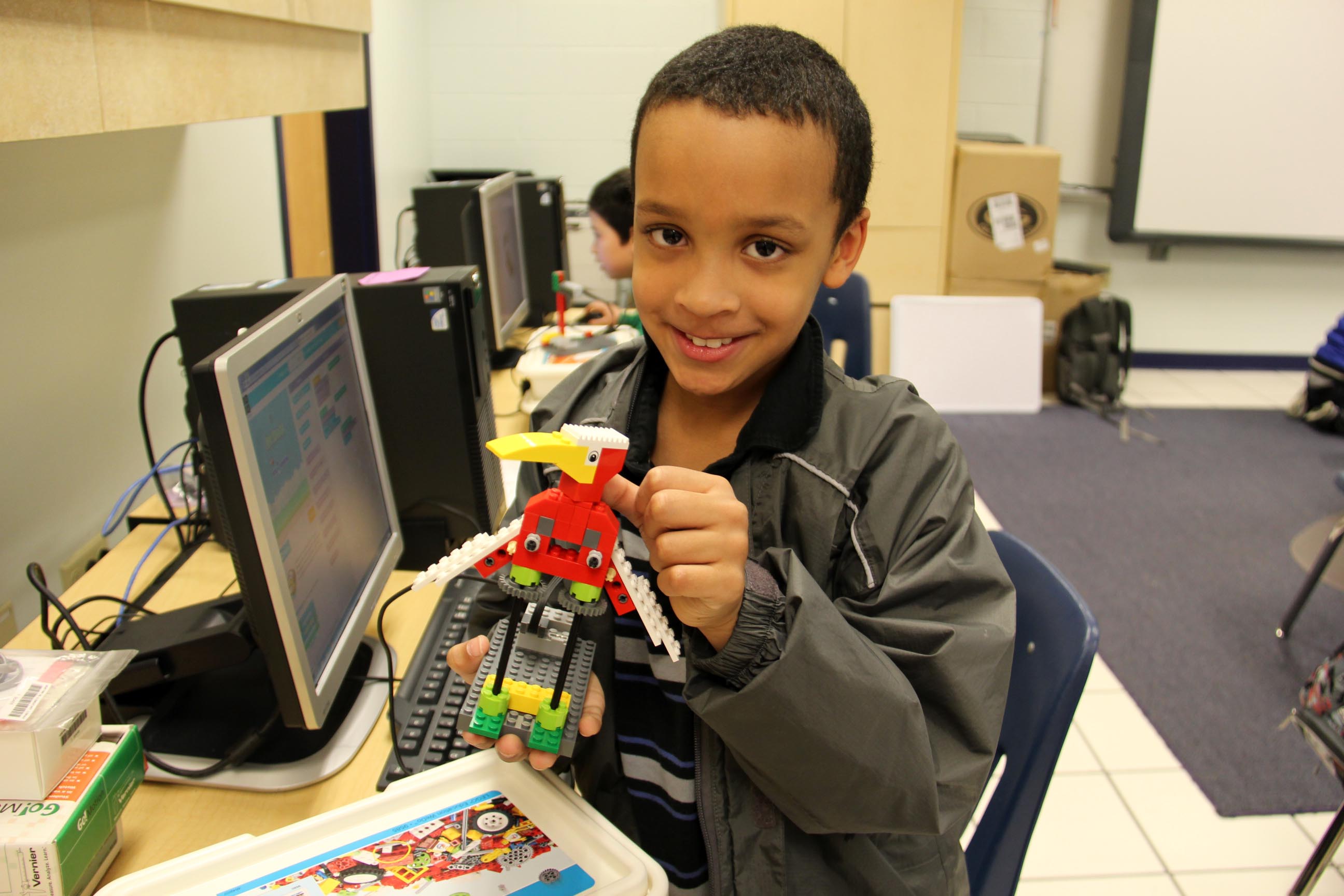 “I thought it would be the most fun if I built this guy,” said Rude while holding Scruffy.

“I liked building it because I love LEGOs and I love technology,” added Rude. “It is also helping me learn how to build something else at home that looks like this.”

Applying what they learn in school outside the classroom is an added benefit, and familiarity with the building bricks helps educators find common ground with students on which to build skills and promote learning.

“They are using things they are familiar with in a totally different way, so that’s the good thing about it,” says Edith Kernodle, CFES second-grade teacher. “It’s not some new thing they’re not going to see in their everyday life. They know what to do, but their thinking is totally different.” 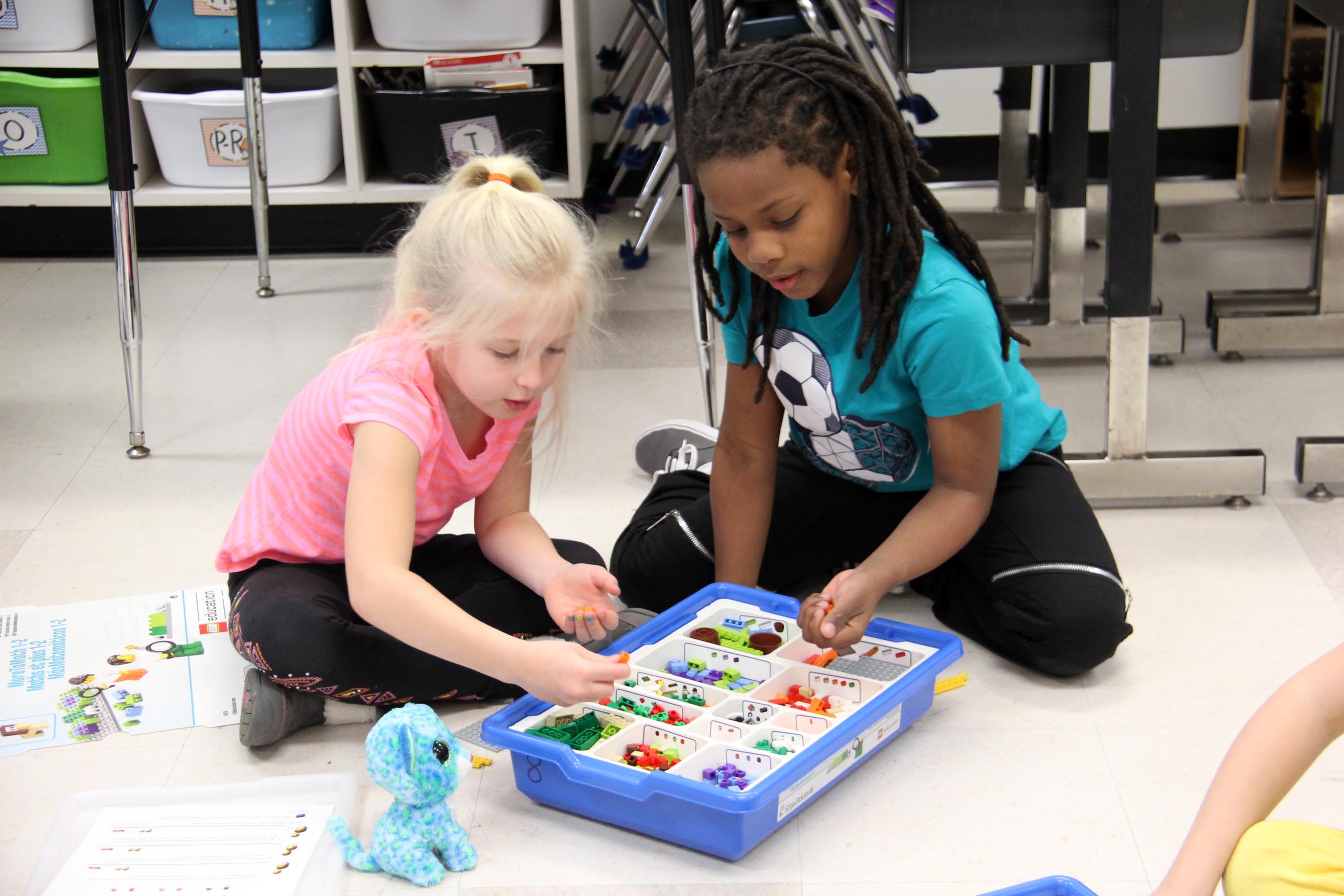 Sharing their thinking with one another is what Clifford asked Kernodle’s students to do after constructing and solving the following problem: We bake 25 cupcakes for the school sale. We sell 12 cupcakes in the first hour. In the second hour we sell only 4 cupcakes. How many cupcakes do we have now?

Using a document camera to display its written work to the class, one team described its problem solving.

“We saw ‘sell’ so we had to SELL them,” emphasized the second-grader in his explanation. “In the second part, he sold four more cupcakes. Then how many cupcakes were left? There were nine.”

“I really like they way you guys said the word ‘sell,’” praised Clifford. “The word sell let’s you know that you subtract.” She noted later that second-graders are just beginning to learn about word problems and their ability to recognize vocabulary words that connote a mathematical equation is key.

“At this age, they really need to use manipulatives to solve problems, especially for computation, which is really heavy in second grade,” added Kernodle. “The LEGOs help with that, and it really forces them to talk to one another. That accountable talk is really important because it helps them show and explain themselves by justifying their answers and how they solved the problem.”

Clifford has seen the LEGO-driven problem solving make a difference in first grade as well.

“It was interesting because the teacher said that the kids who don’t normally perform higher were able to problem solve better with LEGOs than the kids who normally excel,” she said.

Problem solving is evident at Newtown as well.

“Hey, you have to see this,” said Rude to his shoulder partner. 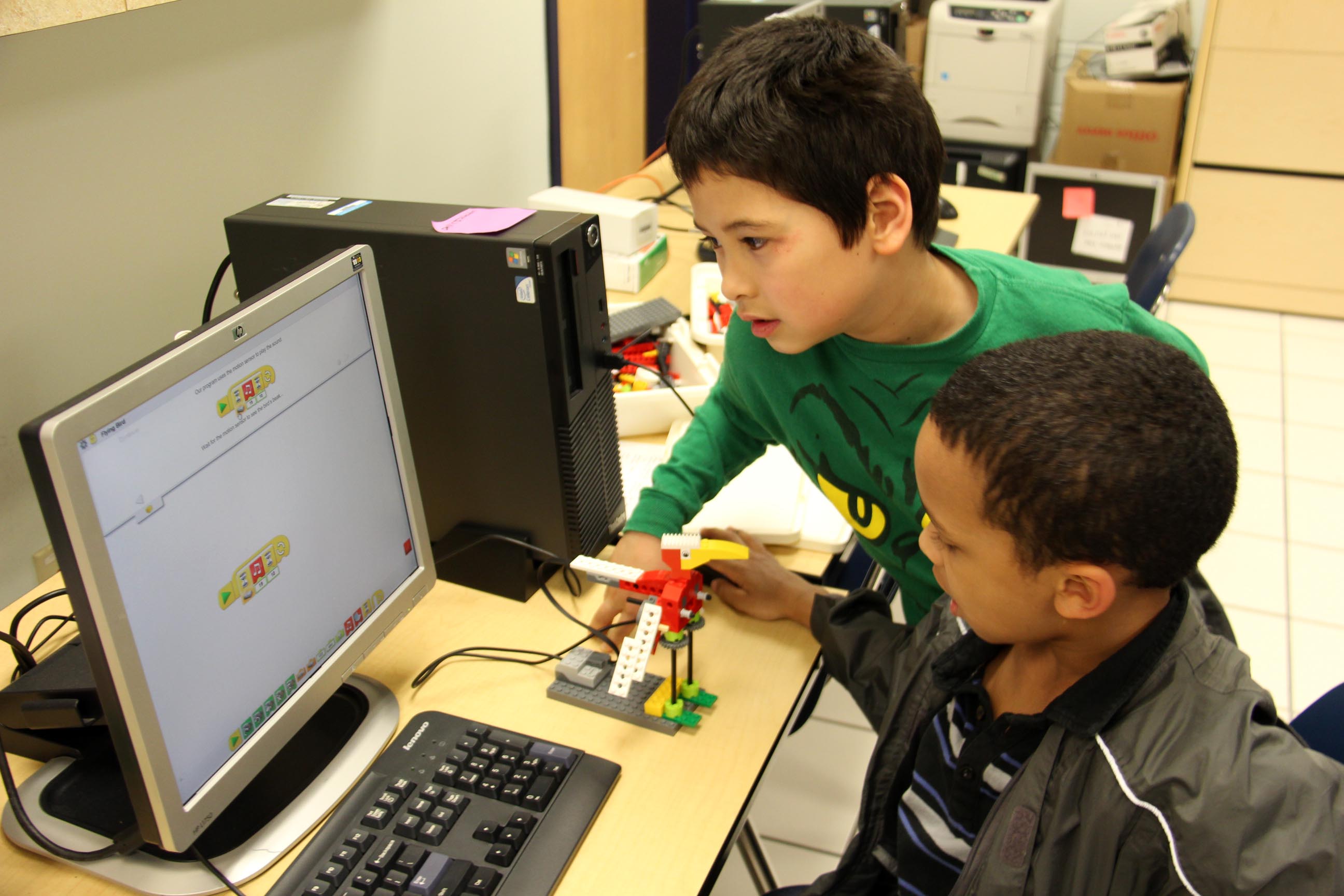 “Oh, look! It spins!” exclaimed another student when he correctly programs the coding.

“Next, they will collaborate to write a story with all their robots,” said Rickard. “Maybe they’re on their way to the carnival and they have to go over the drawbridge, but they have to wait because there is a ship going underneath the bridge.”

Their stories will become scripts for movies they produce with programs that allow students to build background scenes on computers.

Marzir, who built the airplane rescue figure and programmed the propeller to spin, is already thinking of his story. 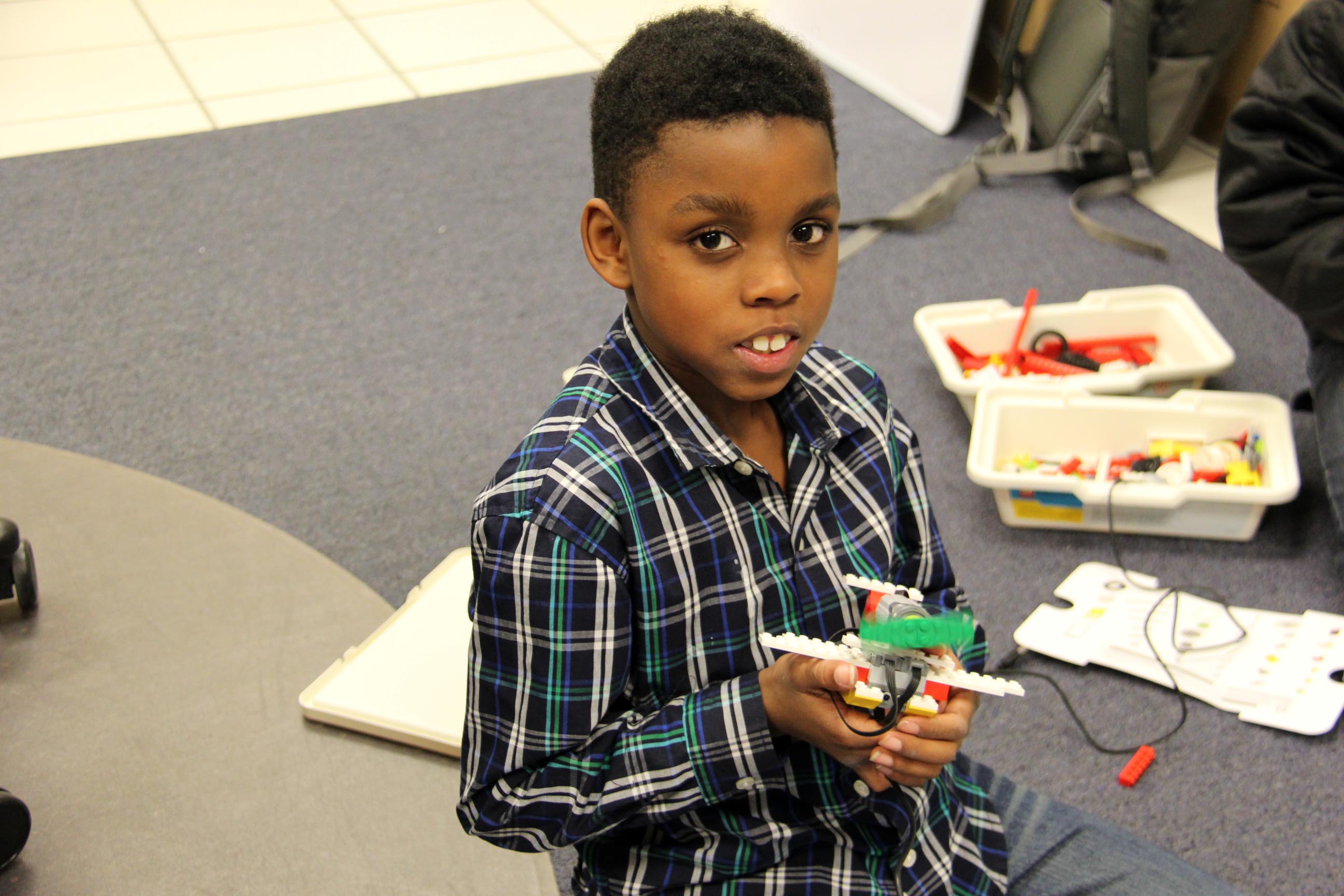 “It’s flying to Africa,” he said when asked. It might visit Marion’s standing lion or Rude’s chirping bird when it lands.

There is equal enthusiasm for learning with LEGOs in Kernodle’s second-grade class. Especially when they take it to the next level and generate their own word problems to ask classmates to solve and explain.

We have 17 cupcakes. We bought four, and next they tried to make 12. How many do we have in all?

Me and Keagan have 14 cupcakes, then we sell 9 cupcakes to an old woman. How many are left? 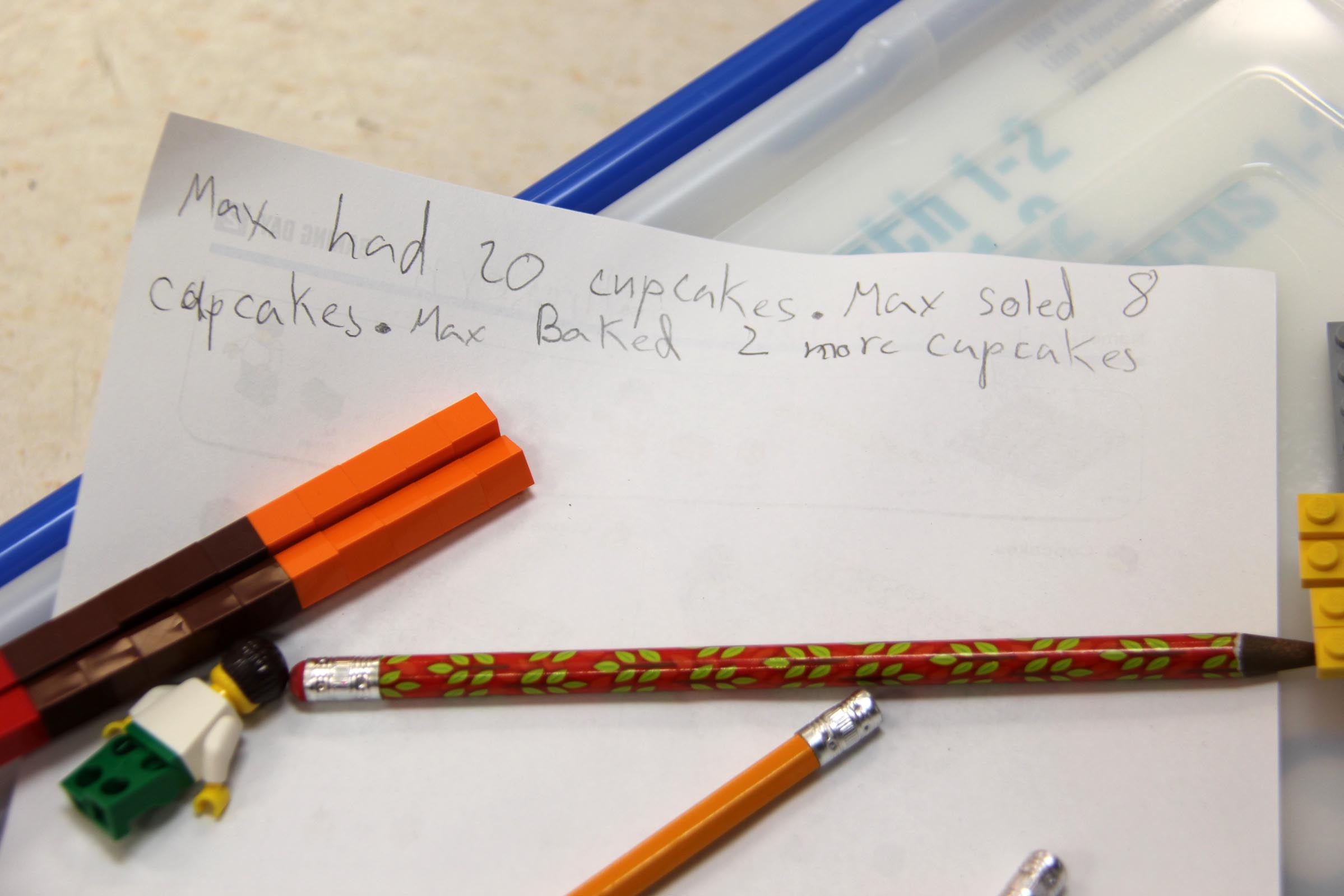 They will solve each other’s word problems after lunch – baking, buying, selling and eating LEGO cupcakes on their own terms.

“I like using LEGOs because they are easy to count, and we can move them around if we need to if we’ve made a mistake,” said Logan.

“It’s helping me learn math, and we get to imagine that they’re cupcakes,” said second-grader McKenna. “It’s fun.” 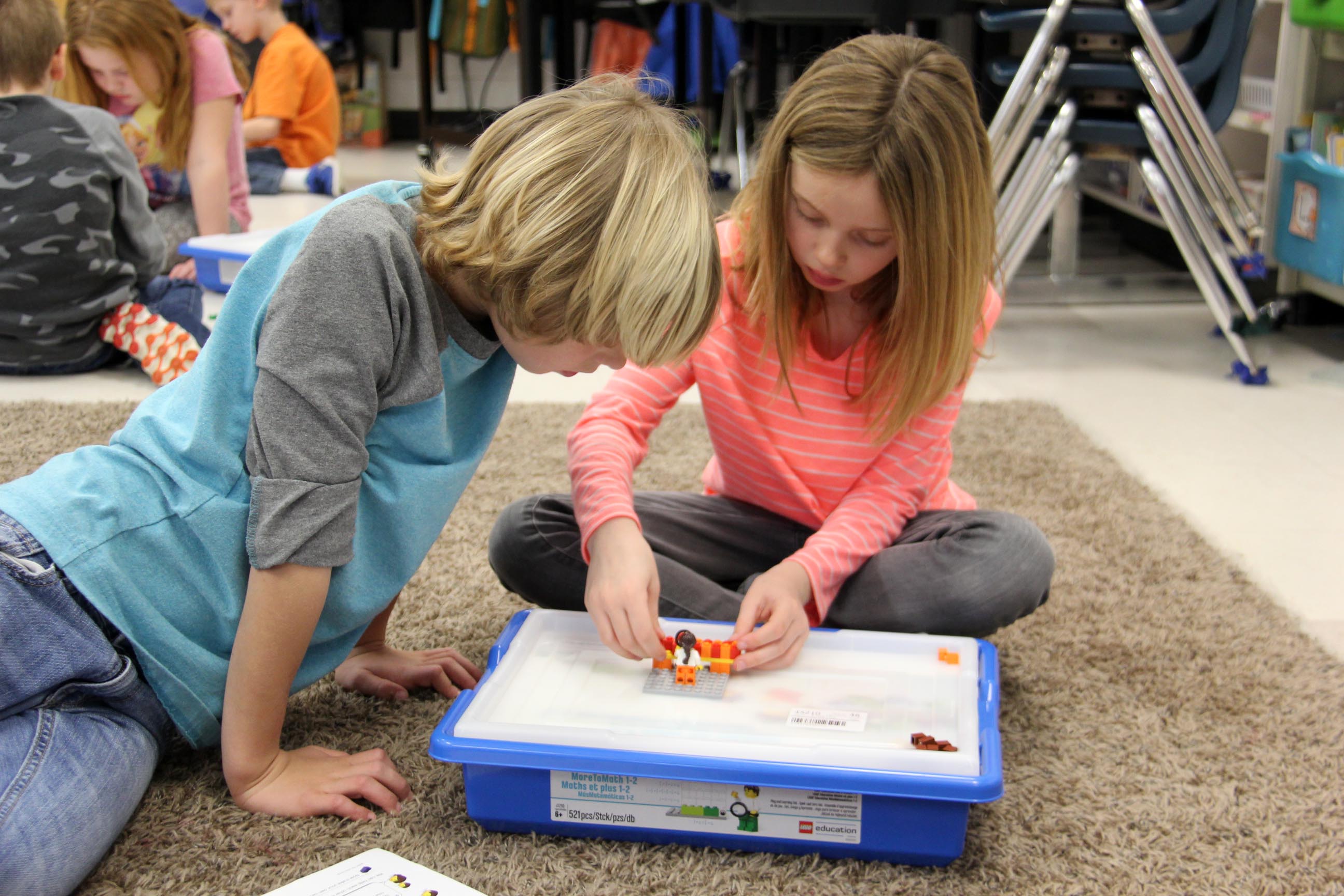 “I like this because it’s not fun when you just do regular subtracting,” said Tanner. “In here, only our brains can help us. Instead of writing stuff down, we build and I like that better.”

Clifford and Rickard were each awarded Virginia Beach Education Foundation (VBEF) grants to purchase LEGO Education kits for use in their schools. Mass Mutual funded Clifford’s grant at CFES, and Lifetouch underwrote Rickard’s grant at Newtown Elementary School. For more information about how you can support creative and innovative learning projects in Virginia Beach City Public Schools, contact VBEF coordinator Debbie Griffey at Debbie.griffey@vbschools.com or 757-263-1337.