At first glance, it would be easy to overlook the large box of grocery store bags siting in the library office. However, the students at Kingston Elementary School know full well that box, filled with blue, white and brown plastic bags, actually holds future hours of fun for boys and girls hundreds of miles away.

As part of work in the school’s library makerspace, students used the grocery bags to create jump ropes for donation to orphans in Haiti.

Library Media Specialist Erin Nye saw the project at a conference she attended, and she was immediately drawn to bringing the idea to Kingston.

The school hosted a bag drive for families to donate old trash bags. Then, students and staff went through the donations, cutting the handles and the bottoms of the bags to make large loops. Those loops were then woven into long strands that were braided together.

“We’ve been working on it since school started,” Nye said. “(The students) were really into it, even the ones who weren’t great at braiding. They would help at knotting the bags together. The blue bags were a hot commodity, so everyone really wanted the blue ones to weave in.”

For some, braiding came easy. For others, not so much, but all students in grades three through five had the opportunity to pitch in for the good cause.

“They have about 15 minutes down here, which wasn’t enough time for them to really be able to make one all the way through. They would just clip what they had done and the next person would come behind. We talked about how we were doing this as a school community and everyone had a little piece,” Nye said.

While students were hard at work, Nye was on the lookout for a potential recipient for these bag-ropes. Thanks to a mutual friend on social media, she connected with the Maison Fortune Orphanage in Haiti to receive the completed jump ropes. In addition, the school planned to keep some of the ropes for use during the winter’s Jump Rope for Heart campaign.

The students were not only excited about creating their jump ropes, they also saw the conservational benefits in helping to reuse the otherwise discarded bags.

“They would say, ‘Oh yeah, we’re really helping the environment. All these plastic bags, they would have just got thrown away, and now kids in Haiti have them literally jumping rope,’” Nye said.

Earlier this December, children at the orphanage received their jump ropes and sent back video messages on social media of them putting the ropes to good use. However, the relationship was brought to a new level this week when Kingston students had the chance to video-chat live with the children in the orphanage. 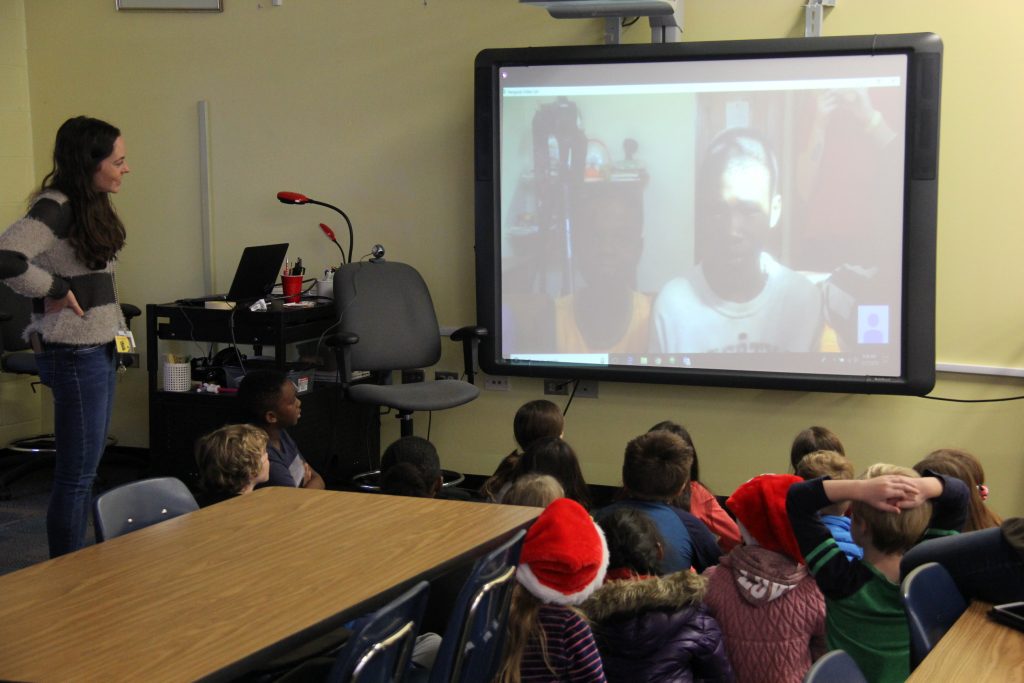 For half an hour, the children peppered one another with questions back and forth.

One little boy in the Kingston library stood up to show off his blue winter coat. The Haiti students were wearing tank tops.

The 12 children in Haiti had already started their winter break, and marveled that Kingston was still in session. The conversation soon turned to other holidays they celebrate and why July 4 was important here.

“We kind of celebrate with fireworks and we kind of do celebrations and, um, why we celebrate it is because we had a war against Britain and we won against them. We became independent,” one third-grader explained.

The biggest crowd-pleaser from the conversation came when the two groups compared their home countries’ flags, noting the different colors and designs from the United States and Haiti.

Kingston will continue sending videos to the orphanage throughout the year, with the hopes of developing a pen pal relationship with the children in Haiti.

And, it all started with a simple idea of turning trash into treasure.

“I didn’t have any idea that we would make this many and we’re still making more,” Nye said. “I’m really appreciative for the conference and the idea and then social media, just randomly making this happen.”