“We’re now going to sing to the children’s video” teacher Victoria Sirris tells her class. “Follow and sing along.”

For the next two minutes and 42 seconds, every student in the class happily sang along with the child performers in the video who were dressed in various colorful red, yellow, blue or purple dresses singing on a stage in what appears to be a winter wonderland. And for those two minutes and 42 seconds, all of the children in the class at Providence Elementary School were not singing in English, but in Russian.

A few classrooms down the hallway, students were quick to raise their hands hoping to be called upon by their teacher to share what panda bears on the screen were saying in captions. 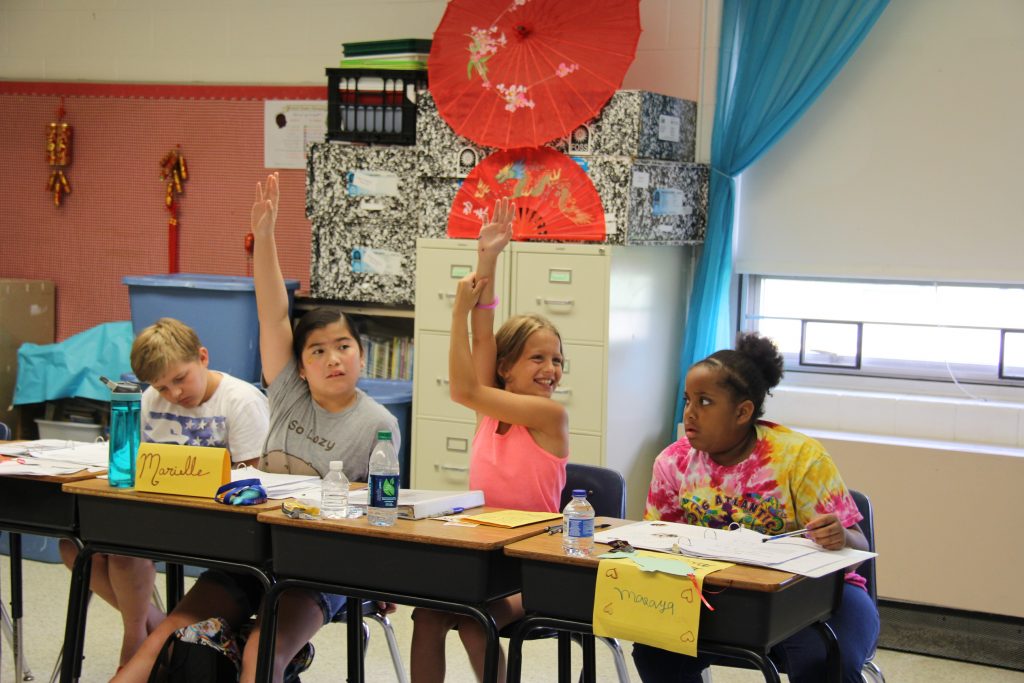 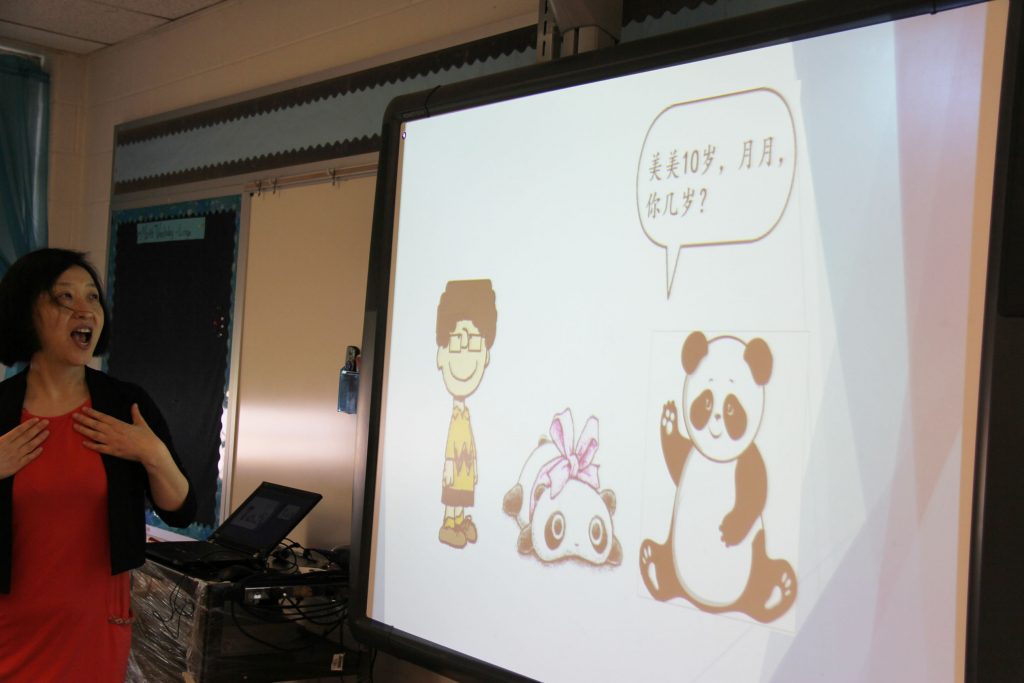 Even though those captions were in Chinese and their teacher was also speaking Chinese, students knew exactly what the panda bear was stating.

The 105 students at Providence Elementary were from various schools across Virginia Beach City Public Schools (VBCPS) participating in the annual STARTALK Elementary Chinese and Russian Summer Academies. Now in its eighth year, the program is a free, four-week immersive experience funded by the National Security Agency. The school division’s World Languages program was selected to bring the program to Virginia Beach for rising fifth-grade students as well as rising sixth-grade students who attended last year and wanted to participate in advanced classes this year.

“The goal of the program is to familiarize them with these critical languages,” said VBCPS K-12 World Languages Coordinator Jennifer Carson. “In basically 15 days of instruction, the students achieve novice to novice high-proficiency level on a variety of topics.”

“It’s hard, but it’s fun to learn a new language,” Flores said as she joined her classmates who were sitting in a circle with their teacher enthusiastically tossing a plush toy to each other as one of them played a Chinese wooden rattle drum.

When the drum stopped sounding, the student left holding the plush toy had to answer—in Chinese—one of seven questions on a white board.

The students had to share where the panda lived, its color, age or other similar information, depending on the question.

“The program is absolutely beautiful,” Sirris stated. “It’s nice that children are learning not only new words, but about different languages and cultures.”

According to Carson, that’s not by happenstance.

“Classes are extremely interactive and hands on. We have Skype sessions with Russian and Chinese speakers,” she said. “Yesterday, we Skyped with a Russian STARTALK program in Connecticut and later today a native Russian speaker who is the parent of one of our teaching assistants is coming so students can speak with her in Russian.” 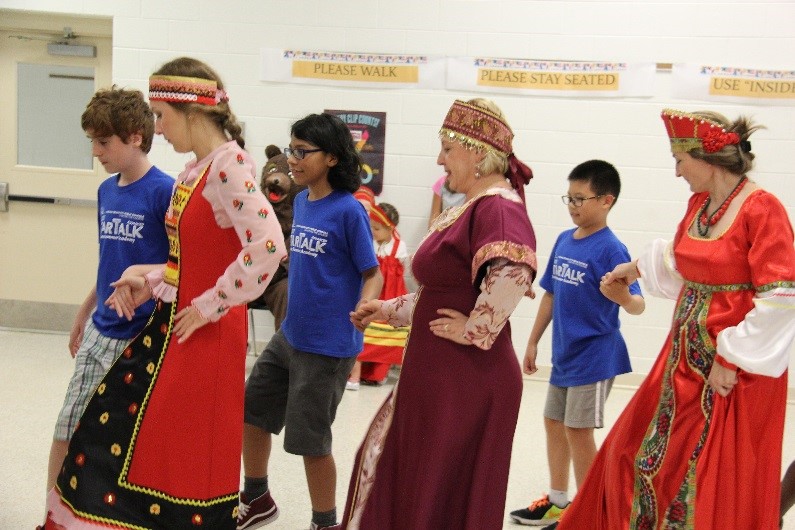 That same afternoon, classes were invited to the cafeteria for a performance by Russian folkloric dancers. Individual classes also took to the stage to perform their own dances. One class incorporated colorful cloths in their dance while another class performed a dance taught a few weeks earlier by one of the folkloric dancers. Afterward, everyone sat down to enjoy Russian food. Some students liked the food while others thought it was an acquired taste. 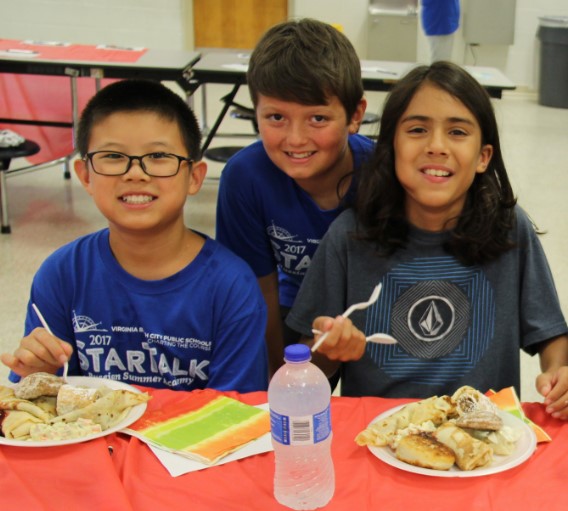 That activity was one of the weekly, or biweekly, activities that students partake in to learn more about the culture. Other activities include traditional Russian art lessons, Chinese daily movements or Chinese art.

At the end of the four-week session, students demonstrate their proficiency through summative, interpersonal speaking and interpretive tests to check for comprehension. Results are used to improve the curriculum and instruction the following year.

Students are also presented certificates at a closing ceremony attended by parents. In addition to celebrating students for their success at the culminating ceremony, program leaders and teachers share highlights of the summer program and each student receives a DVD.

According to Carson, the certificates awarded carry weight when students pursue other foreign language programs because the VBCPS curriculum and assessments correlate with national proficiency guidelines.

Landstown Middle School sixth-grade student Hanna King, who is in her second year attending the STARTALK, says the program is well worth it.

“I know like the basic stuff and kind of more than the basic,” she stated. “I came back because the teachers were nice and you actually learned a lot.”