Since its opening in 1974, Lynnhaven Middle School has served its community diligently. Earlier this month, the school wrapped up its weeklong in-service training with a Pot Luck Chili Cookoff and special recognition for the school’s alumni who are currently employed at the school.

Among those being celebrated was Alfred Olds, the head custodian, who attended the inaugural class of 1974 as a student and who has been with the school for 40 years as an employee. The event was simple: There was no fanfare, no music but a lot of opportunities to learn, laugh and know one another. 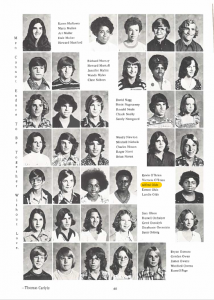 From the time Olds was a student, he had his heart set on returning to Lynnhaven, and he did it some years later. When asked how he felt when he entered the school as an employee, he said that he was engulfed by old memories and felt very much like he was going back to school. He was happy to return to his roots.

And although he took a job with Ground Services for one year, when the head custodian opportunity opened up he did not hesitate — he headed back.

“I am glad I came back,” Olds said, “because this is where I belong.”

Things have changed, Olds said. The school is bigger and keeps growing. The students carry Chromebooks not textbooks. The classrooms of today are equipped with interactive whiteboards and are constantly evolving as technological advances make their ways into our environment.

“Mr. Olds is always cheerful and ready to help whenever needed,” said Dr. Dawn Kramer, school’s principal. “Due to the custodian shortage, he has worked double shifts almost daily for the last two years. He is truly a dedicated community member and we feel so fortunate to have him.”

Olds also shared his most vivid recollection from his student years at Lynnhaven.

“When I began school here we got paddled for misbehaving,” said Olds, “and then you went home, get paddled again for having to get paddled!”

However, the school’s character has remained the same: there is the same feeling within the school and many of the same people have remained there for many years. One of those long-tenured employees who was also recognized at the alumni event was Sarah Morrison, a sixth-grade English teacher, with 28 years at Lynnhaven.

“Sometimes when I drive into the parking lot I think about how different it is from when I was a student,” added Olds. “I commute an hour each way, but I love the school and I wouldn’t have it any other way.”

And from the desire and love for his school sprang a 40-year career of public service. Olds plans to retire, one day, from Lynnhaven.

Custodians keep schools clean and organized. If you are interested in a career with purpose, apply today and join the custodial team.

–by Svetla Tomanova On a late October day, Corporate Landing Middle “opened its doors” for the inaugural “Deaf Night at School,” which was hosted by the school’s Deaf and Hard […]

–by Svetla Tomanova A child’s education begins at birth and giving parents the support they need could be vital. The Parent Support and Information Center is a resource of the […]

–by David Schleck Chris is flying high at Happy Day Café. After preparing his favorite breakfast items, he rolls his cart down the office hallway and greets customers with a […]

–by Svetla Tomanova What is better than a vending machine filled with snacks? How about one filled with delectable books?  In the summer of 2021, Rosemont Elementary School students got […]