It was merely an idea when a group of 15 students from Green Run High School, interested in coding, collaborated with a community member, Rich Hunter, who runs a local software company: Novo Solutions.

Eager to learn about engineering and software design, the young entrepreneurs dreamed up various ideas and voted on the most pragmatic concept. They had no prior experience in this realm. However, with the direction of their mentor and their own YouTube research, they quickly learned how to assemble the electronics and connect the wiring. Although there was trial and error with this task, they figured it out, Hunter said. 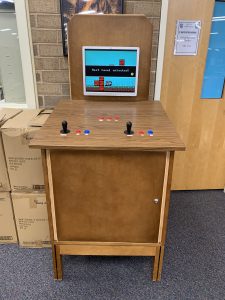 In a few months, they put the idea to the test. They split into two teams: hardware for working on the cabinet, electronics and buttons and software for developing the game.

“The project evolved as we went along,” said Hunter.

Mr. Vasili Giannoutsos, the technology education teacher, provided a foam board to use as a prototype. Meanwhile, a few of the students upcycled an atlas stand that has been in the library since it opened in the 1970s. An old computer monitor served as the game display. Electronics, game buttons and a joystick set were purchased.

As the project neared the deadline, a couple of students joined the community volunteer to troubleshoot and resolve some final issues.

Most of the creators are still at Green Run. Their work is proudly displayed in the library for others to cherish and get inspired. Over the course of this 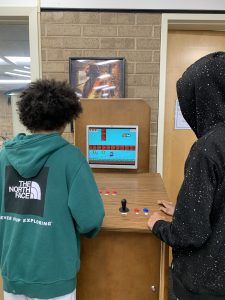 extraordinary assignment, they have learned some lessons: form smaller groups and be more structured so everyone is more involved.

“This project was not only about having fun but also about learning coding skills,” said Frances Fok, a gifted resource teacher who was also part of the project.

Today, the library is transformed and a popular place in part because of this “star attraction.” Beaming happily, students compete for high scores and treasure every minute of it.

When asked if they had other intentions planned, Hunter said that students are interested in adding another game to the console and working on a 3D design and printing, a weather station, and a robot with animatronics and the ability to converse with people.

In addition to the Green Run project, Novo Solutions established a relationship with a small, private secondary school in Grenada – a country in the Caribbean islands. They hope to collaborate, virtually, on similar or different projects and see how the students from both countries can share lessons learned.

“Stay tuned! The Stallions have quite a few ideas that they are trying to bring to life,” added Fok.