Over the summer, Greg Furlich visited his old classroom, which, despite the renovations, looked very much as it did when he was there a few decades ago. He was not a passing visitor, he was back to stay – this time as principal. Little did he know he would soon be in the spotlight. Before he could savor the success of his return, Furlich was announced as the Elementary Administrator of the Year by Superintendent Aaron Spence during the division’s leadership conference in August. It was an extremely humbling moment for Furlich. 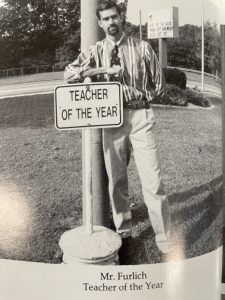 He began his fruitful career at John B. Dey where he was named Teacher of the Year in 1997 and where he has now returned as principal. His career spans over 30 years in the division, and it has come full circle – he is now back at the school where he began his career as a fifth grade teacher. He continues to make the academic needs of his students his daily priority.

During his announcement, Dr. Spence said that aside from nurturing student growth, Furlich also cares deeply about the advancement of his colleagues. He has mentored many of our current principals and has seen five of his assistant principals go on to become principals themselves. 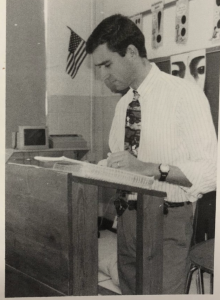 “We were the voices of our peers during difficult times,” said Barton-Arnold. “We aired struggles, joys and grievances. We pushed each other to be vulnerable, to take chances and to make it count. His willingness to share his struggles opened up so many doors and conversations with our colleagues.”

Furlich has a reputation for taking good care of his staff, especially their social and emotional well-being. He earns their respect and they love working for him, according to Glenwood Elementary Principal David French, who has worked with Furlich for more than 25 years.

“Greg has been a role model for me and so many of his colleagues over the years,” said French. “He is my first go-to when I need the best advice and direction for pretty much any need that arises.”

Barton-Arnold echoed this sentiment and said, “Greg not only made me a better writer, but he also helped make me a better person.”

Furlich was equally inspired by his peers and grateful for their support over the years.

3 thoughts on “From Teacher of the Year to Administrator of the Year, Greg Furlich lives out his unwavering commitment to children and learning”