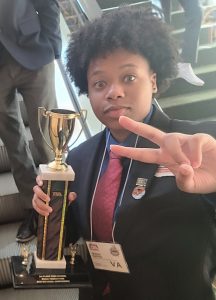 In the spring of her sophomore year, Quinay Gatling began a new draft of her song – one that she did not expect to dedicate to someone she loved and one that earned her a coveted place in a national competition.

It was a bittersweet moment when she qualified and competed at the national Technology Student Association (TSA) event in Dallas in the category: “STEM and the Arts – Music Production.”

She found her passion for music at an early age but didn’t start recording and producing music until the beginning of middle school. Now 16, Gatling brought home a third-place trophy for her poignant song “Granby Street” she composed for her stepsister, Sierra Jenkins, who was tragically killed in Norfolk in March. Gatling was grief-stricken by this unexpected turn of events and took a brief hiatus. But she found solace in music.

“We would have understood if Quinay dropped out of TSA completely,” said Michael Tunney, Quinay’s advanced engineering instructor. “Amazingly, Quinay reworked the song as a tribute to her stepsister.”

Impelled to finish the song, Gatling worked diligently for three days. She wrote the lyrics, recorded her vocals, mixed the tracks, and incorporated samples of the news reports from that dark night. Sierra’s parents speaking about the tragedy can be heard in the background.

“I really wanted people to listen to the song and not only hear the lyrics but the emotion in my voice as well,” said Gatling. “I hope that those who listen, feel inspired to ‘BE THE CHANGE’ and help in the fight against gun violence so that no family has to experience what mine and many others did.”

Gatling had a tenacity of spirit that kept her motivated. Despite everything, she emerged, found her voice, and went on to compete in the state competition and eventually at nationals. Most importantly, she was “confident in her song and the message behind it.”

Gatling was one of seven students from the Advanced Technology Center TSA who competed nationally and one of the 6,000 students from around the United States who participated in the diverse conference activities in June.  The conference theme, Discover Your Journey, illustrated TSA’s 44 years of intracurricular activities, competitions and opportunities for enhanced education and career exposure in science, technology, engineering and mathematics (STEM).

“After a series of regional and state qualifying events, our ATC, TSA students competed courageously against the best three teams from every state,” said Mack Stevens, ATC instructor. “Reaching this level of the competition is intense and I am so proud of them finishing as one of the top ten teams.” 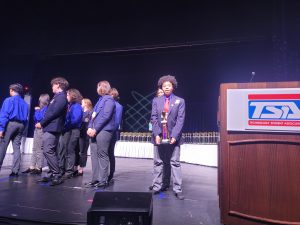 Gatling and her teammates were pleased with their accomplishments. They were thrilled when they heard the announcement of their third place in the TSA Music Production competition. The win was an impressive and heartfelt accomplishment for all.

The tribute song is now available for all to cherish here: https://www.youtube.com/watch?v=TC-lFJKAImg.

–by Svetla Tomanova   Since its opening in 1974, Lynnhaven Middle School has served its community diligently. Earlier this month, the school wrapped up its weeklong in-service training with a […]