Anesa Redd, a rising sixth-grader at Brandon Middle School, said she’s been wanting to learn Russian for “a long time.” 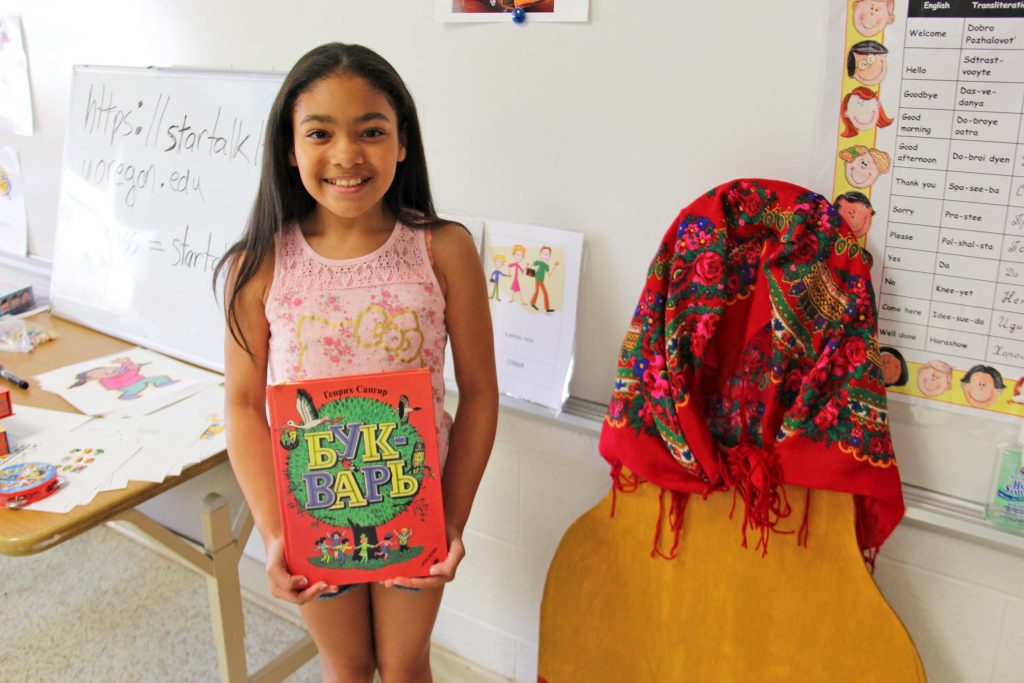 “Boring” is not a word any students are using to describe their experiences in the STARTALK Chinese and Russian Summer Academies hosted by Virginia Beach City Public Schools (VBCPS) for the ninth year.

The rising fifth-grade and sixth-grade participants use words like “fun” and “amazing” when talking about the summer program’s classroom activities, field trips and teachers.

Anna Tichenor attended STARTALK last summer when she was a student at Princess Anne Elementary.

“It was fun, especially with Ms. Wang because we did all kinds of fun activities and learned tai chi,” she said.

Tichenor returned to STARTALK this summer, as a Princess Anne Middle rising sixth-grader, to continue her studies of Mandarin Chinese. In addition to learning the language, Tichenor and her peers are experiencing enrichment classes in Chinese calligraphy and brush painting as well as daily Chinese movement. Russian students also study folkloric dance and traditional Russian art and have already visited the Fabergé and Russian Decorative Arts exhibition at the Virginia Museum of Fine Arts in Richmond. 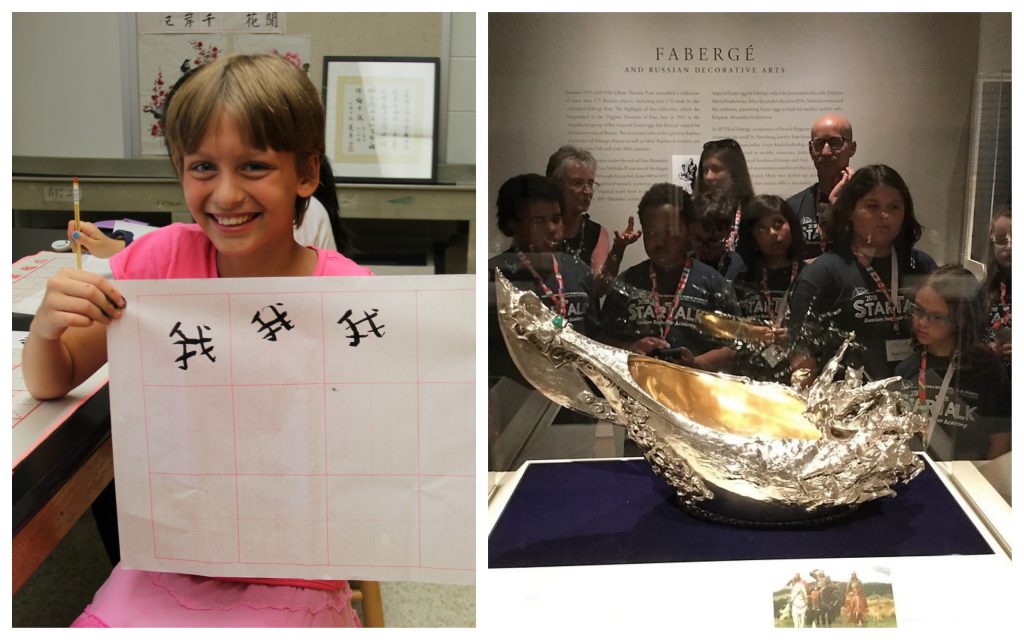 “It’s an extraordinary opportunity,” said Jennifer Carson, VBCPS K-12 world languages coordinator. “They are immersed entirely in the language and culture of either Russian or Mandarin Chinese.”

The free, four-week immersive experience is funded by the National Security Agency and is open to all VBCPS fourth-graders to apply. 75 students were selected by lottery to attend the elementary academies for rising fifth-graders, and attendees from the previous summer are invited to fill the 30 spots for advanced classes as rising sixth-graders. 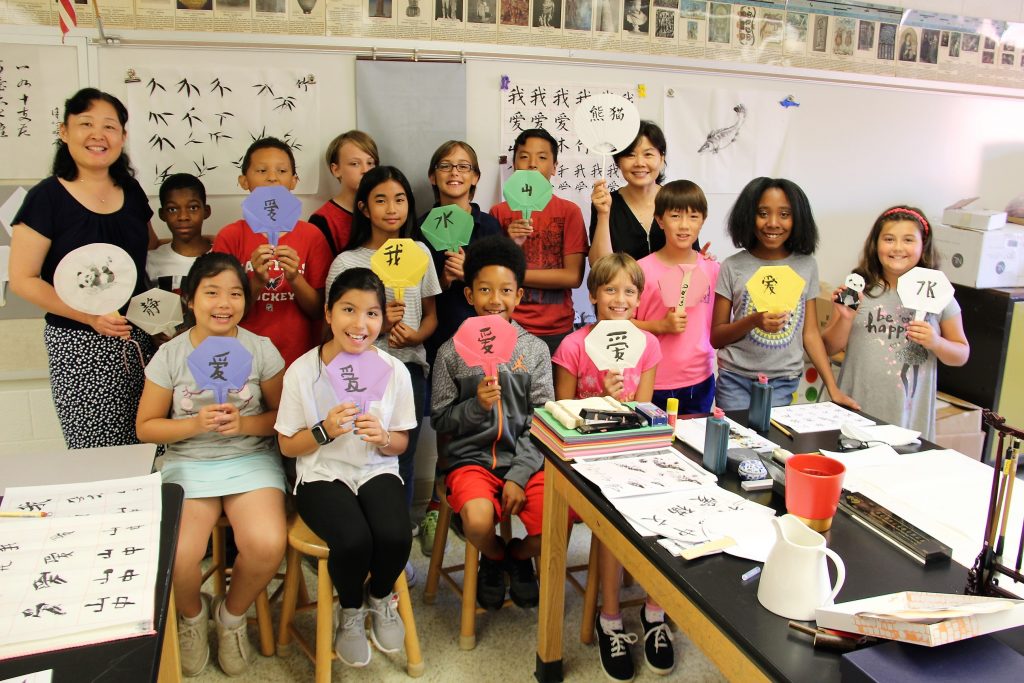 Jack Schmeiser, a rising senior in the Global Studies and World Languages Academy (GSWLA) at Tallwood High School who is serving as a STARTALK volunteer, attended the STARTALK Chinese Academy as an elementary student and he has been immersed in world languages ever since.

“I studied Chinese [at STARTALK]. I took a little bit of French. I’m going into my fourth year of Russian, and I took a summer program to learn Hindi,” he said.

Schmeiser’s studies in the GSWLA also have allowed him to travel the world.

“I’ve been to the Phillipines, India, and I’m going to China next spring,” he said. “I’m excited.”

Traveling and putting their new language skills to use is on the minds of this year’s STARTALK participants.

“I wanted to learn different languages,” said Xander Wilson, a rising sixth-grader at Landstown Middle School, about why he’s at STARTALK. “If I ever wanted to travel to different places, I figured this would be a good start.”

“You can interact with people from other cultures,” said Eben McCammon of his world language studies, “like if you want to travel to China or something.”

Though he is comfortable with Mandarin Chinese now, McCammon – a rising sixth-grader at Plaza Middle School – remembers feeling a bit stunned by teachers only speaking in the target language during his first year in the STARTALK academy.

“I was like, what is going on?” he said. “But then we got the hang of it. They taught us by demonstrating. They helped us learn a new language in a fun way.” 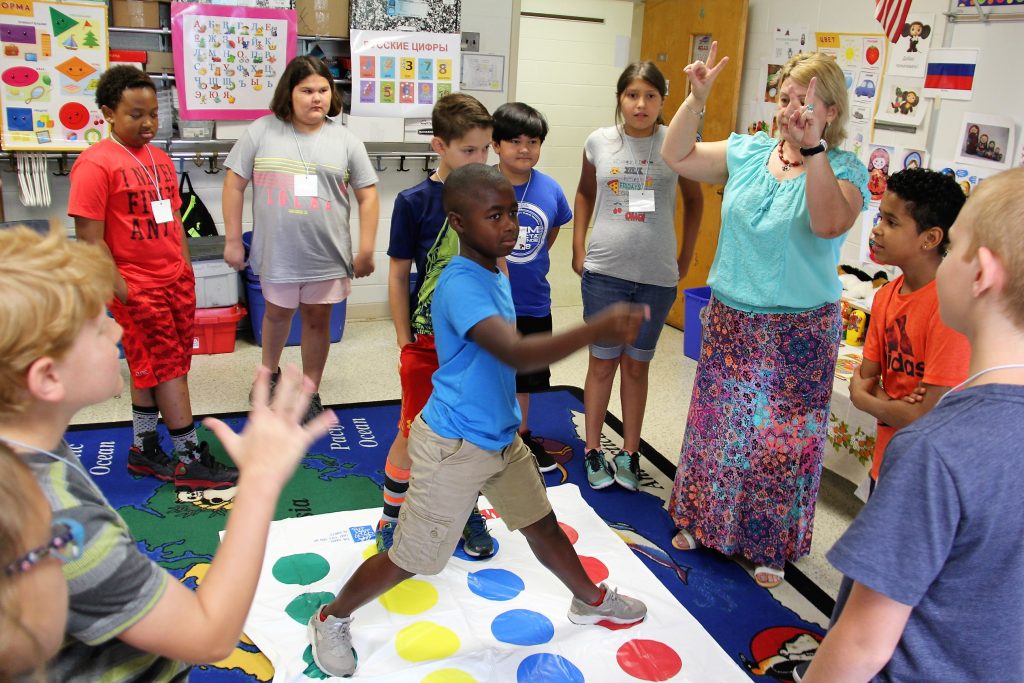 Demonstrating Russian dances is what Zhanara Handy, a STARTALK cultural enrichment instructor, is doing to share cultural lessons and practice the language.

“We introduced two dances last week,” she said. “One is Trepak from Tchaikovsky’s ‘The Nutcracker.’ We use colorful handkerchiefs. It’s good for them to hold onto and we stop and practice the colors. The other one is the Russian polka. In between – you know, they have to catch their breath – I do little drills, speak Russian to them and ask questions.” 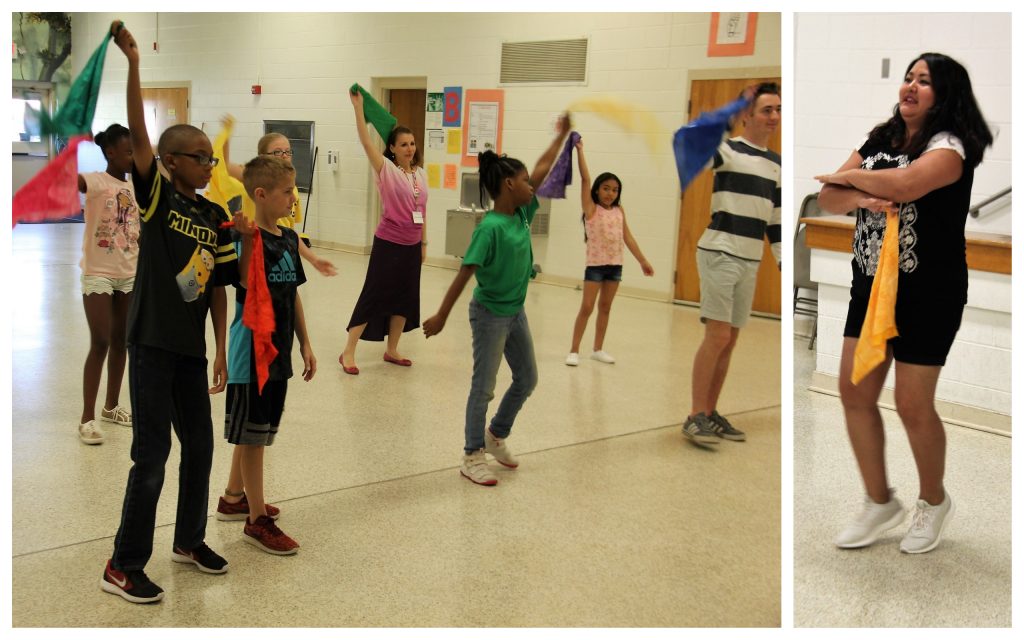 Handy, a native of Kazakhstan, learned Russian in school. “Kazakhstan used to be part of the Soviet Union and I graduated from Russian school; that’s why I’m more fluent in Russian but I speak Kazakh as well.”

She speaks some Russian at home with her American husband and her fifth-grade daughter, who is attending STARTALK this summer. Handy is impressed by the program that she’s only seen in action for two weeks.

“This program is amazing. It’s so effective,” said Handy. “We’re thankful for this program. We moved from up north last year and are just being introduced to this opportunity.”

Introducing students to world languages, especially when they are young, is critical, according to Carson.

“I think it’s essential now in this global community that students become sensitized to other ways of speaking, other ways of expressing, other ways of living in the world – and also to gain some linguistic competence,” she said. “A lot of our [STARTALK] students go on to study these critical languages.”

Students like Schmeiser, who knows his studies will prove valuable in his future.

“When you learn things about the world and learn things about languages,” he said, “that can really be applied to any aspect of your life – whether that be your career or just personal life. I think it’s valuable because it’s so versatile.”

And Redd, who finds English boring, is also doing her part to spread a love of world languages thanks to STARTALK.

“It’s fun because it’s different and every time I go back to school, I teach my friends new things, too.”

To learn more about the 2018 STARTALK Academies, visit www.virginiabeachstartalk.org.